The concert aloe Vera: to dance and kiss 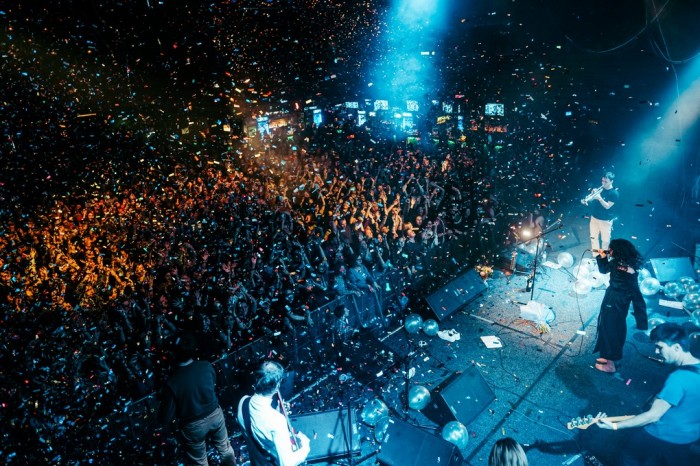 "Every year I get older. One day my lips will lose its softness and attractiveness. The kisses cease to be such tender, moist, succulent. So I don't want to waste time. I called you here to kiss" - this romantic greeting, followed by a video with the kisses, soloist of the "aloe Vera" Vera Musaelyan beginning of the concert in honor of his birthday in Moscow club 1930.

Faith traditionally spent the holiday surrounded by fans of an indie band. Which, as she said, every year it becomes more – five years ago gathered in the hall of 300 people, this year there were nearly two thousand. Two thousand happy spectators ready to dance and kiss.

The birthday girl, dressed in a blue jumpsuit and the whole spangled established on the concert of a rule as "the football": at the wall behind her appeared the screen in the form of a heart, and appearing on it, viewers had to kiss each other. Pairs came willingly have expressed feelings on camera, and those who were in the room alone, can wear bracelets with the inscription "want to kiss" - and find a nice partner or partner.

Really sensual concert of the band almost wasn't "Golden Oldies". There were no "Dahlia", "was Not", and "Scooter", but there were songs from different albums, including the last "Elimona" and new single of the Moscow summer'2019 "Dress on." The song was accompanied by a light show, explosions of firecrackers with confetti from the floor (which the audience later was found in the most unexpected places), tests for youth – fun to gallop along with the birthday girl, the whole chorus incendiary "As gods", and, as expected at the concerts of the "aloe Vera", crazy dancing in the hall.

I really wanted to kiss you. If not for that distance from the stage to the dance floor - Oh. I'd seriously. And I want to surprise you, happy that we did it, - summed up the Belief after the concert.

However, something managed to surprise fans on the show - in addition to songs, dances, videos and shows. Vera Musaelyan told everybody about their engagement and called the name of the bridegroom – they were politician Ilya Yashin. "I can sympathize" she joked from the stage.

The singer promised to have a concert, a bachelorette party in March and invited only girls. Boys, said Vera, can visit her pre-wedding Sabbath "as strippers or in women's clothes."