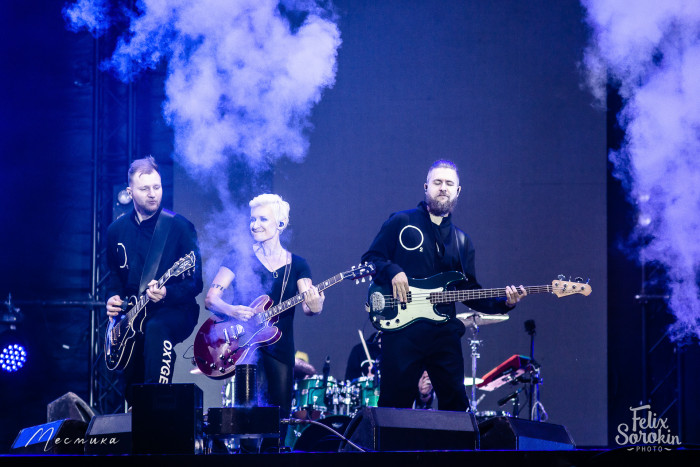 Probably many have seen in American films footage of spacious Parking in front of the huge screen are dozens of cars and spectators from the comfort of cars, watching a movie. Then it was conveniently blamed on the habits of Americans, who together with their rattletrap.

However, the insidious epidemic of the virus greatly changed our lives. Car format mass events became a reality for us. The largest concert Agency TCI and "SAV Entertainment" do thus concerts by various popular artists. Last Friday, Diana Arbenina and "Night snipers" put on quite a show in the Luzhniki stadium!

Format Live&Drive became a compulsory measure in the conditions of the epidemic. It seems that it has its obvious pros and inevitable cons. All in good time.

Security requirements has not been canceled. For the concert can be reached only by car, which can accommodate up to four passengers. On the other hand, a reasonable question arises: the four men in the confined space of the interior of the car will be in for nearly two hours. As for them safely? Practice has shown that quietly sit still, when the stage lit favorite artists, it is almost impossible! Especially if on the street a lovely summer weather. But to leave the car, walk up to the stage to roam the site is prohibited!

Before entering the territory of the spectators will have to pass three cordons: ticket check-in and receive a sticker, temperature measurement of each person in the car, and then inspect the machine for carrying prohibited objects and substances. Since cars are relatively few, all the procedures are very fast, no queues and significant inconvenience does not occur.

It should be noted convenient navigation and competent work of the stewards. The impressive Luzhniki territory and getting lost there is easy. However, from the entry to the territory to the scene for pointers and tips can be reached without adventures. Better to arrive a little in advance to take a seat closer to the stage. This rule works for all shows no exceptions.

A good decision of the organizers is parallel to the stream of sound from the stage to radio in FM-band. Setting the desired frequency on your receiver in the car, you can get a very interesting stereo effects! Especially it would be useful in rainy weather when it would be impossible to go outside. However, lucky with the weather!

Another innovation was the opportunity of ordering and delivery of food and beverages directly to the machine on the field. Of course, this was done to ensure that spectators do not create crowding somewhere in counters of the bar.

It was on a Friday night. The concert started at 20:00 with the band "Masha and bears", which sang their most popular songs, including "Earth" (the soundtrack to the film "Brother-2"), "Ararat" and his version of the song "Creep" by British band "Radiohead", but with the text about Lyuba children's poetess Agnes Barto and love in German.

When at Luzhniki began to go twilight time "Night snipers". Team leader Diana Arbenina could not just go on stage. So, she rolled up on a motorcycle. It looked impressive! Only ride without a helmet even for small distances is a dangerous occupation. It is known to every motorcyclist. However, other two-wheelers at the site was observed, and the drivers of four-wheeled boxes this nuance did not notice.

But even this small liberty Diana forgave when she went on stage! I must admit that so few know how to speak: expressive, sensual, soulful, a little anguish... Such feelings I want to believe, to empathize with the heroes songs! The action on stage was accompanied by flaming torches and smoke geysers, which in the darkness looked particularly impressive! 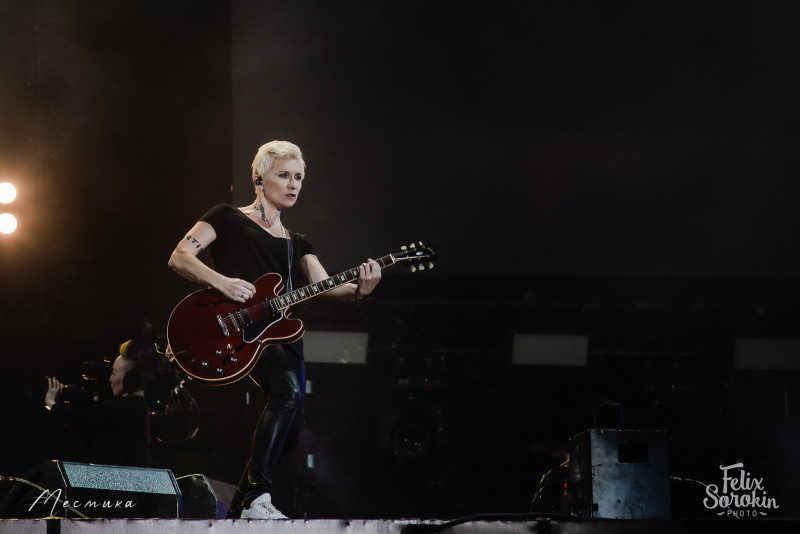 But Diana would not be myself if all of his speech held within strict limits. Any artist need to communicate with a live audience, to see their eyes and emotions. Iron car no emotions. The people dispersed across the area. This is one of the few "cons" of road format. Apparently, so Diana decided to climb on the farm to better scrutinize the "hall" and then went down to the audience. Of course, the machines have no one to sit failed! Diana with a guitar in hand walked almost all over the place, and then climbed higher, continued his speech in the middle of the machine. She sang, surrounded by admirers and smartphones. 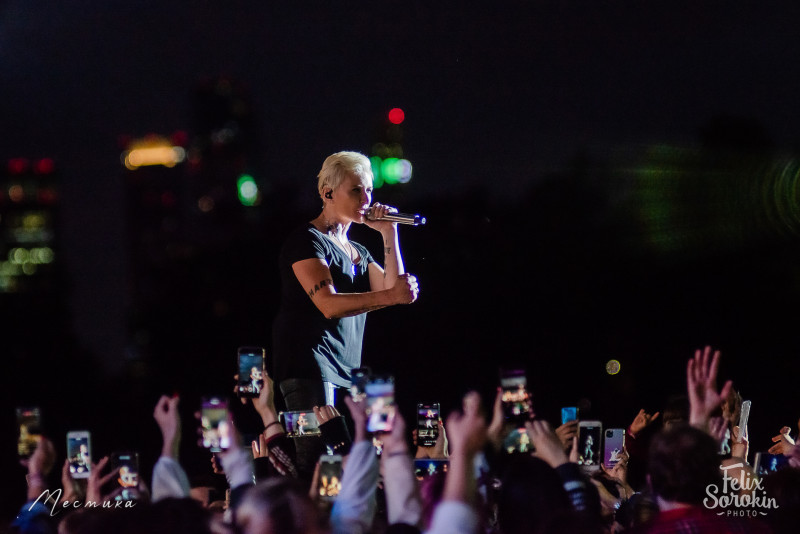 During the evening the Sharpshooters were given a clip of all his famous hits: about "thirty-first spring," "sailor in bell bottoms Indigo, roses, smelling wormwood" whom "sorely lacking", and many others. It was sensual, bold and cool! The audience thanked as I could! And yet, the flashing lights and annoying beeps sharp rattletrap do not go to any comparison with the roar of the crowd, hundreds of hands and thousands of enthusiastic eyes! Klaxons will not be able to sing along with or instead of the artist favorite song: you can imagine, when singing a huge hall? Unfortunately, no service for drinks and the audio broadcast on the radio will not replace it!

The concert ended like any other. The Parking lot quickly emptied. The city at night and empty roads to get to the car to the house and for half an hour.

As a General conclusion we can say that to go to such concerts Staboutit, anyway! First, they make some of the best concert agencies of Moscow, and level of organization – at height. Second, how long to wait before these great performances of well-known and favorite bands and artists – is unknown. Here is a great opportunity to see and hear. Thirdly, it is a new experience and feeling.

Next show is this coming Friday. See you at the concert!

To look the photo report: "the Night snipers", the Luzhniki stadium