As he left Ozzy. The second attempt 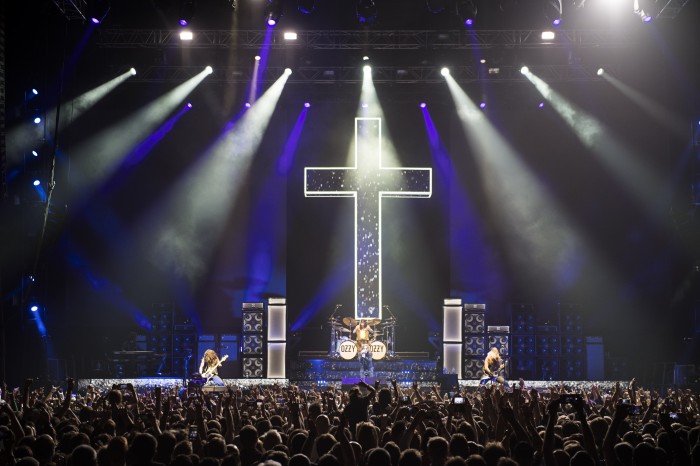 At the beginning of summer, June 1, in the capital, declared himself the king of darkness himself the excellent quality Ozzy Osbourne! In Moscow, he came to a concert in "Olympic" to open the European part of his farewell (nooo!) world tour “Nomoretours 2”.

The godfather of heavy metal came to the white stone on the eve of the concert to sign the name of the star for the walk of Fame in Vegas Crocus city. Incidentally, he hinted that it's not his last visit to Russia. I want to believe!

The opening act for Ozzy worked rock-n-rolldice of Peru's “Contracorriente”. Played the good guys, but at the time of their performance the audience was barely half full. It is clear: all the people that ate, took pictures and bought merch in the corridors of Olympic, came to hear a Legend with a capital letter!

Opened the concert, according to tradition, the "O Fortuna" is a composition rooted in the middle ages.
Next came "Bark at the Moon" song, which this year marks 35 years! But it sounds quite modern, despite the fact that a generation had to grow up listening to her in the mornings and evenings!
Not giving the listeners a break, Ozzy sang "Mr. Crowley". It is, incidentally, a further three years older than "Barking at the moon"! Here's an opportunity to return to the past for fans of the ageless legends!
By the way, worth noting: the average age of the listener, who at this evening in the Olympic, close to 40 years – came and yesterday's schoolchildren, and uncle portfolios, and it has a gray metal heads, personally caught the heyday of “BlackSabbath”.

Most of the setlist made up of songs from Ozzy albums, but they were interspersed with classics from Black Sabbath: with hits like "War Pigs", "Fairies Wear Boots" and "Paranoid" that the band played at the very end of the show, having already left for an encore.

None of the song have left the audience indifferent. "SuicideSolution", "NoMoreTears" and "RoadtoNowhere" – after each Olympic full to capacity, was filled with a standing ovation. Pauses between songs were almost gone, Ozzie had time only to say to the fans thank you for coming this evening together with him to while away the evening. Well, and demanded loudly to shout!

At some point, Osborne decided to relax a bit. What to do, the years take their toll... Guitarist Zakk Wylde started playing SuperCool solo, about fifteen minutes. Started on stage, then went down to the audience, visited both sides of the stage. Immediately followed by a powerful drum solo performed by the drummer Tommy Clufetos. Top class from virtuoso American musicians!

The visual design was also at a high level. Two large screens on the stage and two on either side of her, which broadcast the speech, photographs from the archives of the group and multi-colored screen saver. Light show, changing from song to song, it was also above and beyond. Especially the moment when the whole room as if immersed in white fog! Space atmosphere!

Stepping out for an encore, except “Paranoid”, as noted above, Ozzy sang “MamaI'mcominghome” – a composition dedicated to his wife Sharon. A great song in a great performance! Emotional orgasm! Shivers down my spine and tears in my eyes! I had a blast!

Having been at the concert Ozzy Osbourne can no longer to any concerts not to go. At least this year. Better not be...
Ozzie, don't go!