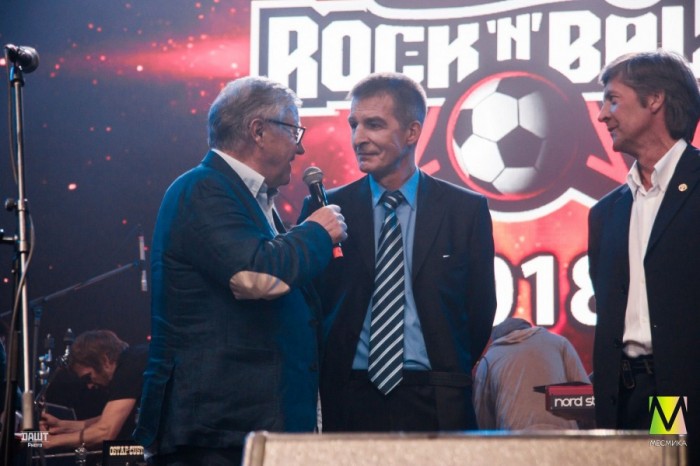 What most Russians call the main event of this summer? Of course, the world Cup, held this time in our country. You can follow the progress of our team or not interested in the match results, but is impossible to pass by without coming into contact, in any case, with this event, while staying in one of the cities hosting the world Cup.

The opening ceremony in St. Petersburg on June 14 and subsequent match Russia – Saudi Arabia has watched not only in the fan zone at the stables area, where he quickly ran out of space. Big festival Rock'n'ball focused on sports and music, was held in the ice Palace and collected brand of top participants.

Came the day the fans and lovers of music. But the program has tried to write to please both categories.

The start was given at five o'clock, when the stage rose band "Starlings of Stepanova", performed several of his songs.

Shortly after asking the cheerful attitude of "starlings" at the scene of the Ice Palace came "the Slot". Moscow alternatives has supported the rhythm and did not give relax to those who have already reached the stage.

The degree of tension slowed, a foreign guest star, Ken Hensley, ex-Uriah Heep keyboardist. He was in the group the main sponsor for several years, then went solo. Keys not the only working tool: virtuoso he owns a guitar. And yet the most poignant songs were played it was under the keyboard. Supported Hansli backup singers that added depth to the music and voice.

His speech broke through the voices of football fans. Russia scored a goal, and then such cheers greeted every new of the five goals scored in Russian national team gate in Saudi Arabia. Two more scored, for example, during the performance of Buckwheat. Anastasia, vocalist, took it calmly and with humor, understanding the feature of the event.

Vadim immediately began with songs by "Agatha Christie", most of whom sang the chorus throughout the hall – "Carpet-copter", "Sailor", "Fairy taiga". Towards the end of the set Samoilov added a few of his works already from solo creativity.

"Picnic" as always responsibly approached the visualization of speech, and the audience is led a merry Beethoven, glowing robot, shaman, and screens Manila victim "Trap".

The headliner was "spleen". Alexander Vasilyev with the team played the entire repertoire of street musicians. But seriously, it was all the songs that everyone knows regardless of age, musical preferences and education. Who did not sing with your friends "no Exit", "Orbits without sugar", "you stick to your guns", "My heart"? "Spleen" is one of the most popular groups. Vasiliev himself was surprisingly energetic, cheerful and agile. Often seen on stage slightly meditators, but not that day.

In between performers the audience was entertained by the leading radio station "Piter FM" Alexey Sokol and Olga Bogdanova. They held competitions, talked with those who came, played t-shirt of the festival for answering sports questions.

Also interesting moments of the match was commented by the participants of the Champions "Zenit-84". They also presented gifts to the young pupils of the club and held an autograph session.

The idea to organize a special celebration for the opening of the championship and to listen to good music instead of crammed into a stuffy bar or in the Packed to capacity the fan zone itself is excellent. The participants are just wonderful, the sets are truly a hit, dancing a lot – we can safely say that the first Rock'n'ball was a success.

For those for whom music was not enough, the next day at the club "Heart" organized after party. Of the participants of the festival there were "Starlings of Stepanova", Blind Vandal, ensemble "Fifth corps", at the same time it was possible to hear a very good young group of participants of the festival Revolution from St. Petersburg: Ashes Collide and Black Radiance. The atmosphere here was already much more relaxed and more friendly – guests were walking between the hall and a private courtyard "of the Heart", talked a lot, laughed and enjoyed the Friday and summer weather. The concert itself was a very pleasant addition to a major festival – a different atmosphere and message of the event became not contrast, and the detail, which may not be enough.