Heavy alternative to an acoustic format 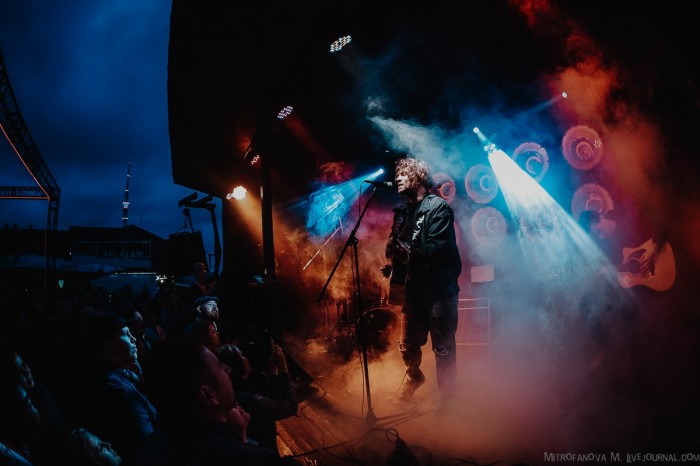 Fans of heavy alternative music rarely going to the big companies, especially to hear "their" music in a relaxed acoustic format. July 8, such a possibility has appeared at the festival "Acoustic fest", held on the roof of the Hi-Hat to Saint-Petersburg. Fans gathered in several underground bands: "psyche", "7 race", "Tamarisk", "Television", "Image" and Vasya Vasin.

The event itself was held on the panoramic rooftop with views of the Botanical garden. The spectacular performances took place, which was superimposed on the mood of the historical center of St. Petersburg. Yes, the acoustics in such a situation was never better. In order that the audience do not get bored, while the musicians are tuning their instruments, and were able to get your dose of music in non-stop mode, working just two scenes. On large, main, acted "Imaga" and the headliners - "7 race" and "Psyche." Well, on a more chamber space delighted the audience with everyone else.

The evening began with performances on the main stage of the group "Imaga". They surprised a great sense of humor, always appropriate jokes and electrobiological, perfectly complemented the performance. Despite the technical difficulties and occasionally breaking a guitar vocalist, they remembered and made a great impression. At least the fact that in the pause managed to play the "Movie". The cello. A very impressive gesture.

After the audience moved to the small stage, where he listened to Vasya Vasin, leader of the group "Bricks". It is nice solo, but because its ironic "rockrap" played from the band's repertoire, and personally Vasya Vasin. Taken all on "Hurrah", and after the audience nearly tore the musician asked to take a picture. By the way, to catch almost all the artists could be in for the entire evening - on the roof actively went and he didn't hide and FeO, and Bob and Sasha, Rustic, and all the rest. Than active use fans to keep material memory for an autograph or photo.

Technical problems did not prevent "7 race". The love of the audience is not measured by the absence of overlap that became clear when the choir sang a song at the beginning of their set. Later, however, everything got better and played the remaining time musicians without delay. Their songs seem to especially fit well on acoustics: hungry romantics, philosophers of music, able to see life under his own, very original angle, "7 race" I want to listen to, less distracted by the tense music component.

"Psyche" in St. Petersburg no less popular and has become the second headliner of the festival. One of the participants, Andrey Zyryanov, came on the scene twice, including in the group "Television". In acoustics you can hear them very often, because the tone of it at least curious. However, some elements of the electricity still broke even through a change in the format.

In General, about the "Acoustic fest" it is possible to speak as about a very curious and successful experiment. The assembled structure is rarely used in this format, and the audience most committed to active behavior and drive power. But to hear so many closed with the underground alternatives in a single evening in one place, a new sense of their songs, and just hang out in an informal setting, it was interesting to even the most inveterate bullies and active fans.