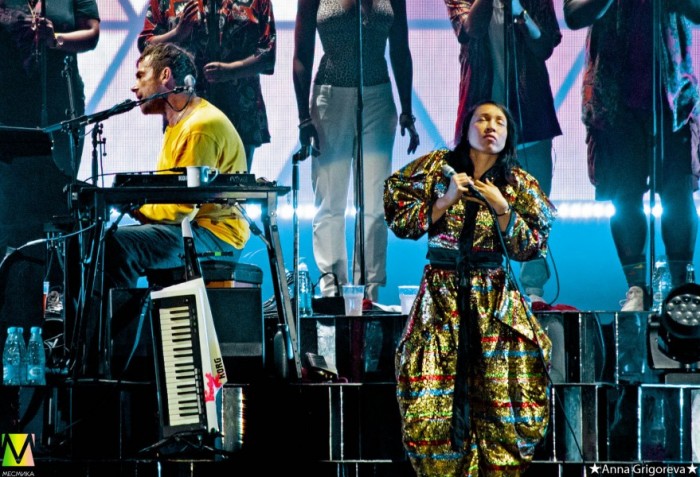 On 28 and 29 July was the most anticipated event of the summer - festival Park Live. This time the organizers decided to break away from the topic of stadiums and made the festival really summer - this time the event took place in Gorky Park, a favorite with all. The first day was dominated by an easy, stress-free and relaxing environment.

First performed at the festival the Russian rock band Tiger Cave, which joined in the festival with their Western sound. After they loaded the vivacity of the atmosphere of "The Hatters". Muzichenko was as always wonderful with the violin and attractive husky voice. The female half of the group attracted the attention of the extravagant image. Energy was so much that many have forgotten about the scorching sun. Little Dragon with his charming vocalist Yukimi Nagano (no, not the one in Nagano which you think) Swedish-Japanese origin. His demeanor on stage Yukimi resembles a light version of the singer björk, but Little Dragon is the björk that you can relax, dance and anything not to think. White top with feathers and red gloves - this is a reference to that legendary dress with a Swan, which once appeared in public the very Bjork . Atmosphere continues Tove Lo. Sweet and kind with a innocent girl but with a hint of extravagance - the first song she is accompanied by visuals of half-naked ladies. Swedish singer gave a relaxed and even a little beach mood: just wanted to feel not in a stuffy town, but somewhere near the sea.

A little towards the evening it got cold and started to rain, and with it, came on the scene Kaleo, which warmed all their tube tracks and performed his most popular track, "Way Down We Go". 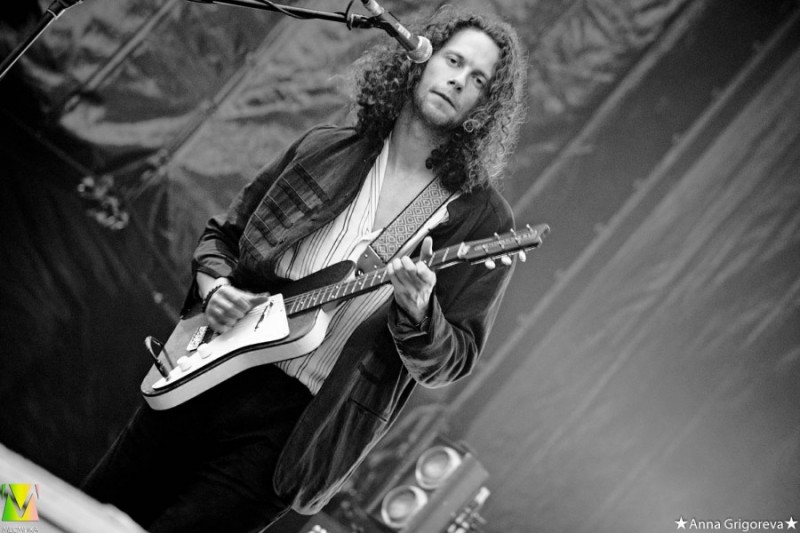 The most awaited event of the evening was the band "Gorillaz", which first came to Russia. Since 2010, gangs of Damon Albarn hadn't heard, but in 2018 they're back in operation with the new bomber album "The Now Now". All performances this summer for "Gorillaz" always begins with a green background on the screen, the guitar riffs and the purple says "HELLO" and then pathetically came on stage, the whole team headed Alburnum and the gig was no exception. Damon takes his guitar and begins to play M1 A1. Then the band started playing the song "Tranz" from the new album, which sounded excellent live and is much bigger and atmospheric. From a live performance of this track I wanted to forget about everything and ascend to heaven. Rhinestone Eyes pleased with such unbridled energy that began to tear to the fans and touch all hands; and then madness was replaced by a lamp "Tomorow comes today". I must say that Damon, even in these quiet songs knows how to write his stormy temperament, and it will look very harmonious. Unfortunately the long-awaited concert had to be interrupted due to heavy rain that flooded the whole stage and equipment. Over the speech on the song "EL Manana", the execution of which looked very nice in the rain and gave the song even more dramatic. Yes, the rain has caused disruption of this long-awaited concert, which all so long waited, but this fact has made the performance of the track "El Manan" the best in a long time.

The third day, the organizers dedicated the first of all trip-hop artists. The only Russian group Everything Is Made in China. Especially liked the Scottish band "Young Fathes", which really stood out from the mass of trip-hop artists. The Scots pleased with a powerful drum performance and appropriate for rock stars ending - a bit guys destroyed the stage. Tricky first came with live musicians and this time decided not to use synth arrangements. began his show is very unusual: with his team he came to the music in the style of ragga, stood facing the audience and just dance. Then, finally, performed the track "Do you wannа", which turned everyone on the right wave. The song "I'm Not Going" the musician finally turned to face the viewer and for some reason started to cry.The entire performance was accompanied by the sensual sound and emotional behavior Tricky-he has raised his hands to the sky as if talking to God. Bonobo hypnotized his lovely vocalist and enveloping sound.

The main headliners of the evening were Massive Attack. It all started innocently enough: the performance of British musicians was accompanied by a video installation, which was adapted to the Russian audience. First flashed philosophical slogans like "What is the definition of altruism?", then the headlines of Russian media and memes "How about this, Elon Musk?" and "mood Color blue." Then it started rather provocative texts about politics trump the suppression of freedom, talks of the security services. Was given a very interesting phrase – "Any people very easy to manage — just tell me that they were in danger of attack, show them the enemy, and all the pacifists declare unpatriotic".

The show Ended with the phrase: "We are all in the same boat", and then on the screen flashed the infinite faces of the refugees. The show gave a special mood, it strangely hypnotized and forced to think about many important things. Of course, to this must be approached carefully and with a particular mood, after the second day of light music, all this was perceived quite difficult under such a show, of course, need a special mood. It is very nice from what the musicians do not have to use his old billet, and adapted the show for a specific audience and reacted to the performance in Russia with great responsibility and love to the Russian listener.