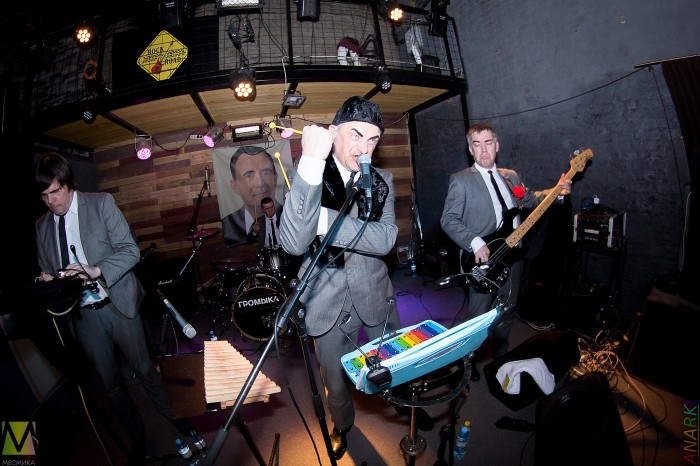 September 15, the city of Nizhny Novgorod was visited by a unique group of the future from the past "Andrei Gromyko". Meet the team with the fans was held in the club "Rock & Road" ulitsa pochainskaya, d which offers a wonderful view of the Kremlin, but at the same time the club is in the distant feel of the center location which makes the concerts more comfortable and like "their". Despite the lateness of the concert, the audience was no upset, besides the bass player, Andrei Medvedev, willingly communicated with the audience, showing off a red carnation in his buttonhole.

The concert began with the song "Here's to you, hold on!", that immediately set up the already cheerful audience in a cheerful mood. Who would have thought that under a heavy psychedelic twist, you can make a slam and dance so that I didn't want to go anywhere not even a minute!

From the stage flowed inexplicable energy, which is relished even those who first saw the full performance of "Gromyko", though the first reaction is often similar to shock. However, curiosity is not clear where the undertaken the magnetism and charisma of the team that is impossible to hide the harsh eyebrows and did his job.

But in the middle of the speech a few times something went wrong and the group had to call the engineer to correct the problem, and Maxim Valeryevich never stopped to wonder what is happening with tools, magic or tin?

But we still inclined to the first option, because only through a special kind of magic these masters of the glockenspiel, stylophone and the Russian language did not allow the audience to stop dancing.

This evening there were songs from all four albums, for example, "I Told you", "Throwing spear", "I got out of the shower", "Man my head", "water", "Paustovsky, Bianchi and Prishvin", "to Deliver to Moscow". Of course, the audience waited for "Testosterone", and the song "Artem" caused a big storm also because the organizer of the festival name is that way.

"Andrei Gromyko" is not the first time went to Nizhny Novgorod, but Maxim Nikitin said that at this time the city liked them more (perhaps because this visit had a warm time of year, and besides, the city is still kept, restored and rebuilt items from the football world Cup this year).

Towards the end of the speech "Gromit" handed a large bouquet of red carnations from which the cloak-and-dagger peeking white roses.

After almost two hours of fun, the audience poured into the street to share impressions: someone arguing about the meaning of songs "Gromyko", someone didn't made that evening "lunch" and continued to have fun, and some simply rested on the benches. After a half-hour break, Maxim V. and Andrei went to the fans to chat, take pictures and give autographs.

Positive text with an ambiguous meaning the group had positive emotions on the Nizhny Novgorod land and wait for the return of "Gromyko" will undoubtedly be eagerly and faithfully.