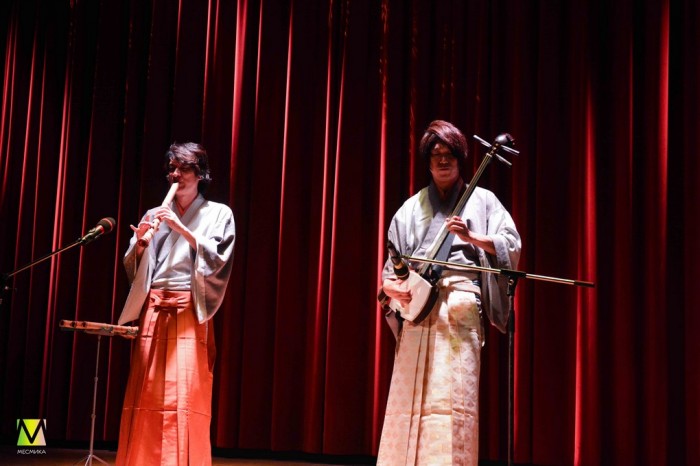 2 Oct in the Engineering building of the Tretyakov gallery hosted a screening of the film by Yasujiro OZU, "Five. 5 long plans dedicated to Yasujiro OZU". The event was noteworthy because the viewing of the film opened the concert of the Japanese group HIDExHIDE. In 2017, the group celebrated its tenth anniversary. Hideki, Onoue plays the shamisen, Hideki Ishigaki – on shakuhachi.

The event was opened with a welcoming speech by the Minister of the Embassy of Japan in Russian Federation Mr. Yamamoto Toshio. Mr. Yamamoto talked about the fact that 2018 is declared cross year of Russia and Japan, about the importance of good relations between the two countries and the huge contribution to the culture of Yasujiro OZU.

After the Minister's lights went out and the cinema was filled with the sounds of traditional Japanese musical instruments: shakuhachi and shamisen, which simultaneously transferred the audience to the times of Ancient Japan, and returned them to the present time.

The concert was opened by a work written by Hideki Ishigaki, "Sisi fundsin" (Like a lion). Then the musicians talked about their instruments.

The shamisen is a plucked three-stringed musical instrument that is most often used geishas for their performances. There are three types of shamisen: futozao, tuzao, hosozao. Hideki, Onoe uses the shamisen with a neck of medium thickness, tuzao. The shamisen was performed by Japanese folk song "Sakura Sakura".

Shakuhachi is a bamboo flute of varying length and width. On longer shakuhachi is difficult to play in the movable paced, shorter gives more low sound. Is a musical instrument stray monks and was used for meditative practices. On shakuhachi was performed the product of Taki, Rentaro "Moon over the old castle."

Group HIDE X HIDE also participates in events devoted to the works of Mikael Tariverdiev. And literally the day before the performance in Moscow they were at a music festival "Organ+" at the Cathedral in Kaliningrad. The festival is held under the auspices of the Faith of Gorislavovna Tariverdieva. In the Tretyakov gallery was a work written by Mikael Tariverdiev, "the Little Prince" is familiar, but in a very unusual and new sound.

In 2018 in the Pushkin Museum. Pushkin is a very significant exhibition "Masterpieces of painting and printmaking of the Edo period". In Russia was brought priceless masterpieces of painting and engraving: two works have the status of national treasure, ten have the status of "particularly valuable cultural object" and five to the status of "particularly valuable object of art." Some of these works rarely leave the confines of Japan. And the music for the teaser of this exhibition was a fragment of a musical composition "Tone-Teck-tone", which this evening was performed by Japanese musicians.

The concert ended with the song "Kothoga" starts the lyrical and melodic Intro and has a very energetic and memorable end.

The audience were captivated by the new sound of their favorite tunes. It is a pity that immersion in the world of shakuhachi and shamisen was short-lived as the cherry blossoms.