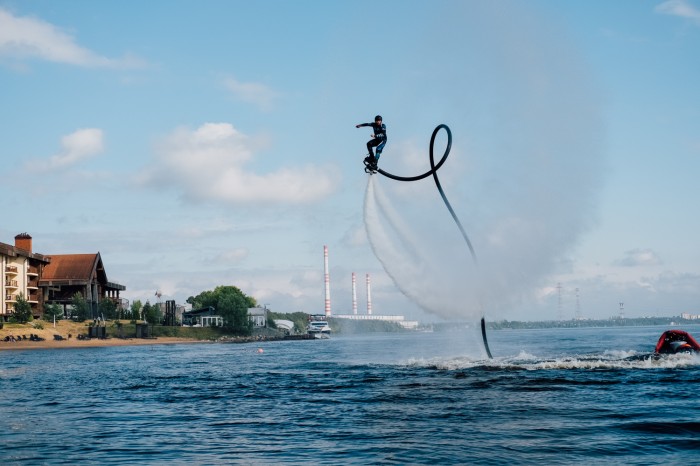 In the Tver region has completed the jubilee 20th festival of extreme sports and music "Russian wave". The event was held at the event hotel "Konakovo river club". The headliner was made by Nike Borzov. The festival hosted a regatta J70, SUP-race and race on the jet ski, which was attended by 20 athletes.

Competitions were held in three disciplines: the "ring race" (the race with a mass start), "slalom" (time) and "freestyle" (demonstration of the tricks). The races involved two types of jet ski: Runabout – sit-down jet ski and Skidivision – water bike without a seat.

Victory in racing and slalom on the stand-up jet skis won Muscovite Alexey Kuleshov. Among athletes at a sitting jet ski was the best Alexander Lukin, representing Moscow oblast. In freestyle, first place is shared between Andrew Valchanov and Nikolay Stepanov, representing the team DivanRiders. Among girls the best was Julia Malkin.

"The competition was attended by athletes-fans. In this case, our task was to create for the participants an atmosphere of professional starts. From the point of view of the organization of the race was held at the highest level. Judge and comment on competitions in freestyle Mikhail Ershov, champion of Russia, the chief judge in the discipline of the Championships and Cups of Russia on aquabike. The chief Marshal of the race was Karen Sarkisyan who has also for many years judge of the largest all-Russian competitions", - says Alexander Istomin, flight Director of the competition.

"I was pleasantly surprised by the level of participation. It is encouraging to observe how the increased rescissionary just in the last 2-3 years. And those athletes who perform today at the Amateur level, have the potential to go in the future on the professional competitions", - says Mikhail Ershov, President of the festival "Russian wave", a multiple champion of Russia on windurfing, champion of Russia aquabike.

"Russian wave" is a community festival, bringing together a wind - and motor-dependent. For 20 years he promotes extreme sports, expanding the number of their supporters and raises the level of the participants. For example, this race we see how the professionalism of the participants of our events is growing and it is very pleasing. Naturally, the baton of the Amateur start at the hot participants of the "Russian wave" the water of the Upper Volga intercept the main professional event of the season. This week, from 20 to 23 June there will be held the Cup of Russia on aquabike, which will determine the strongest athletes of the country 2019-the year", - commented Andrey Krasnov, the General producer of the festival "Russian Wave" and Chairman of the organizing Committee of the Cup of Russia on aquabike 2019.