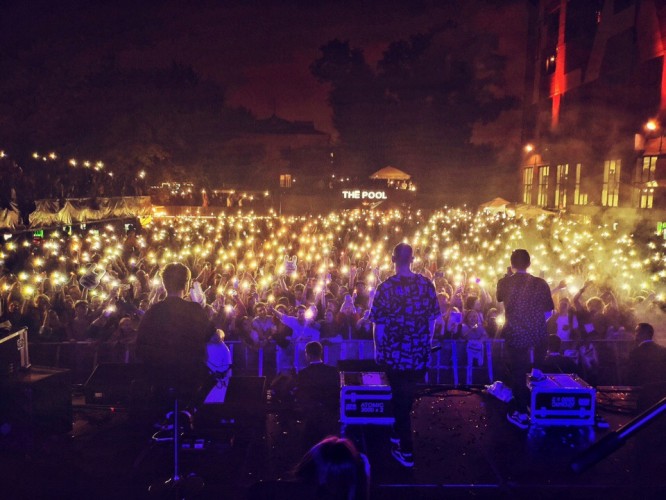 "T9 us know — we're famous!" in the capital died down summer "Picnic Pauzern" group Anacondaz, as it were.

This year the guys are celebrating your 10th anniversary, so SOLD OUT the day before the speech was not a surprise. At the concert you could buy the newly printed tickets to the anniversary of the December concert in Adrenalin Stadium. By the way, the excitement had little effect on the input — the organizers made a miracle and by the beginning of heating the hall was full, and a cordon of not attracted to traditional long queue.

Opening for them was well familiar Shadows of Liberty. With the task "to stir up the crowd" guys have done it completely — if by "Evolution offends" the hall sang actively, then a track from the new album "Who are you?", on the site commenced hot slam. In General, the guys and the guests started and the rain (!) dispersed — that is the level!

This year's group anniversary, so the set list was rich: and old tracks — "Hate", "Rockstar",, "Save, but not save", "Mama, I love you", and very old, "Naive", "Hello City" and fresh "Cold", "Cabernet", "do You know who he is." The audience reacted a powerful support circle pit and slam up in almost every song.

At the end of the performance the audience traditionally sat during the performance of "My husband" and ended the official part of the concert the song "Motorcycle". Of course, after was encore! The guys returned to the stage with the track "Hate", and finished off your great summer picnic is a traditional farewell song "Trains" on which the hall was illuminated with hundreds of lanterns.

"Pauzern Picnic" has become one of the most exciting performances of this summer. Anacondaz way was long from the opening act Noize MC, to full Stadium — but still it is evident that children sincerely and with dedication carry out each of their performance. We wish them good luck in the tour and looking forward to the jubilee concert in the capital. Yeah, yeah!