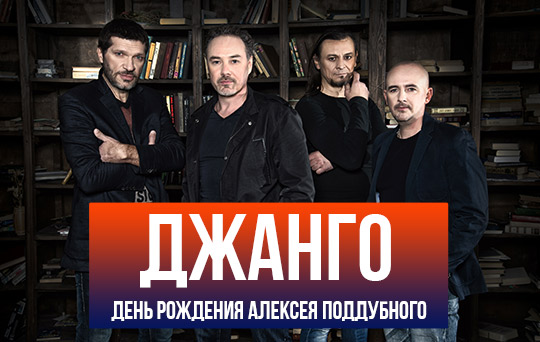 On 8 January on the stage of the Avrora Concert Hall will host a big concert of Django. According to tradition, the leader of group Alexey Poddubny will celebrate your birthday along with your favorite listeners!

Songs Jango is familiar to anyone who is not indifferent to good music and soulful poetry. A hallmark of the artist for many years is the song "Cold spring", which became saudtrek to the movie "Shadow Boxing". With this song began the popularity of its author. But her playlist group no less known songs - "was not was", "Papagan" (TV series "Soldiers"), "come Back, you're too far away" (for/f "of the Runaways) - duet with Ekaterina Guseva, "Barefoot Autumn", "you", "Vengerka" (episode "Last reproduction"), and "Summer of the seventeenth Avenue", which became the main song of the series "the Fugitive" with Ivan Okhlobystin in a leading role. Songs Jango is the best suited for the movie - they are lyrical, wise, for a long time remain in the hearts of the listeners, filling them with love and energy.

Definitely need to visit the concert of "Django" in its entirety! After all, live performances of famous songs sound special! Big rock, drive, energy, with a constant melody and sincerity. And improvisation Alexei Poddubny on piano and virtuoso playing of accordionist Alexey Skipin increase the degree of cordiality to the limit!

Sing our favorite songs together and celebrate the birthday of Django.

Will, as always, sincerely! Be sure to come!