Aquarium on 27 June in St. Petersburg 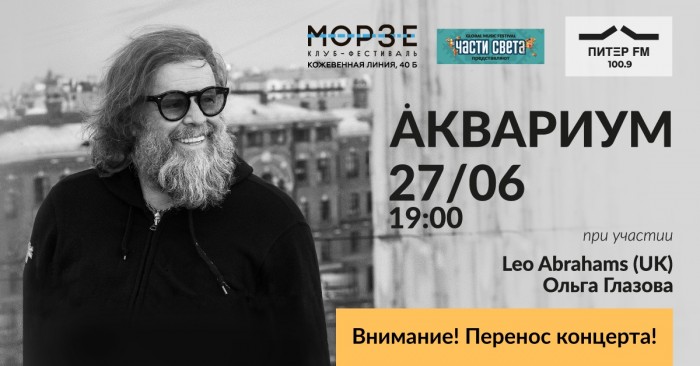 The company "Light Music" and Boris Grebenshchikov has prepared a gift for all lovers of world music — spring concert in the festival "part of the world"!

For this special concert BG has invited his favorite musicians, who not only will participate in the set of group "Aquarium", but will perform solo:

Olga Glazova – gusli popularizer of culture, the only performer in the world on a 30-string harp. The composer and poet, she has already released two CDs of solo music for the harp, restored the lost technique of the fingers on the harp. Singing a song in Elvish language.

In his 26 years playing in the Catholic cathedrals and the Philharmonic in Europe; winner of 30 awards, including two nominations in the field of contemporary art. S. Kurkina; participant in joint projects with the "Theodor Bastard", "Refining", by Sergey Starostin; her harp are heard on the album of Boris Grebenshchikov. Performed on the First channel and STS. New listeners Olga immediately striking virtuoso improvisation, she tells the story of the harp. Pot. Immerses everyone in this world...

Leo Abrahams is a British guitarist, composer, arranger and sound producer, extremely productive in a diametrically opposite musical directions. At various times he worked with Marianne Faithfull, Nick Cave, Brian Eno, Adele, Ed Sheeran, Annie Lennox, Bryan Ferry, Seal, and other world musicians. Boris Grebenshikov has not remained on the sidelines and communicate with the British extracted the maximum creative use - on the album "Time N" the electric guitar, Leo appeared in 8 of the 9 tracks.

Music with his participation sounds in many famous films — among them such blockbusters as the Saga of "ocean's eleven", "Code 46", "Lovely bones", a number of European works.

In Russia visited several times with different compositions (for example, Roxy Music), and in 2008 was priglashen for the first time as a solo artist. He showed me the program of the album "Scene Memory" met a very warm reception from the Russian audience. Fragments of this program will sound in the club "Morse code" of the 28th of April.