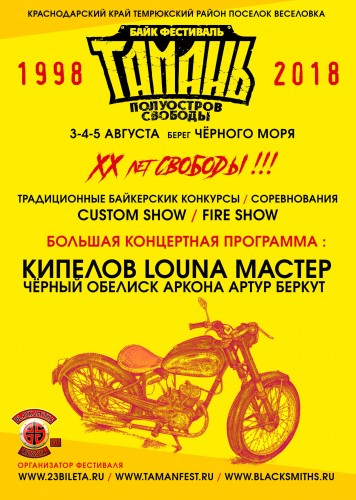 This year the festival "Taman – Peninsula of Freedom" celebrates its 20th birthday!

Jubilee "Taman" in 2018 will be held on the Black sea coast in the village of Veselovka, Temryuk district, Krasnodar territory. Sand dunes, a salt lake with healing mud, and, of course, the sun and the sea, it is Taman.

This year for the first time in the history of the "Peninsula of Freedom" at the festival will consist of two scenes, which will include 70 groups. The most relevant Russian and foreign performers. "Taman" is a fashion festival of music for every taste.

The festival promises to be remembered not only music, but also unusual entertainment: staged stylized wedding ceremony for these lovers of romance, raffle bike, a Yamaha 400 Drag for those willing to try their luck. And in the dark the guests of the festival expects a really hot show: Festival of fire arts "reign of fire", which this year will be held on a competitive basis with a prize Fund of 100 thousand rubles.

To date, the bike festival is one of the few Russian events, where you can combine leisure, sport, tourism and music with the subculture of bikers. Moreover, the "Taman" can rightly be called the safest festival in Russia, the organizer of the festival bike club BLACKSMITHS MC ensures the safety of all guests "Peninsula of Freedom".

This year for festival "Taman" are:

From 4 to 6 August at our festival will run Tent city. Is a convenient affordable place to stay within a 2-minute walk from the main festival site.
With the ability to stay on the territory of the Tent camp is available to all interested owners of any festival tickets. The cost of space under one tent for 1000 rubles for all three days of the stay.Paying for accommodation in a Tent camp you will receive:

Place under the tent

Place under your bike

The ability to charge phones and gadgets

The passage in the Tent camp is only possible with a festival ticket. Tents and other equipment can be rented in the camp.

Rules of residence in the territory of the Tent camp:

1. Maintain cleanness on the territory of the Tent camp.
2. Not to disturb the peace at night.
3. Not to use on-site excessive amounts of alcohol.
4. Not to breed open fire(barbecues, gas burners, etc.)

From 4 to 6 August at our festival will operate paid Parking for the cars of the guests of the festival.
The cost of one Parking space for 1000 rubles for all three days.
Attention! Motorcycles are in the Parking lot of the festival for FREE

How to get to the festival

The only passenger rail station on the Taman Peninsula is located in Temryuk, but it is no longer valid. Therefore, those wishing to attend the festival will have to make a choice between the nearest stations, depending on where the train on which they sit. Same story with airports.

Railway station, Anapa: passing trains no, it is the Terminus. The station is outside the city at a distance of about 50 km from Temryuk. To yourself to get you need to be on the bus or a taxi to get into town, to the bus station and from there by bus or minibus in Temryuk.

Railway station Duct (Slavyansk-on-Kuban). The station stands in the city, from it by taxi or public transport you can reach the bus station, and from there to the bus station Temryuk on the bus or on a passing bus, then from Temryuk in Veselovka.

Railway station tunnel (the village of Verkhnebakansky). To Temryuk, a distance of about 80 km, the station is in the village. The bus terminal or bus station is not there, so either catch a passing bus from Novorossiysk, or go to Novorossiysk.

Another option: periodically from the railway station and sent a Shuttle bus to the bus station Anapa (how to get from Anapa written above).
Bus tickets and timetable at the box office/railway station. Keep in mind that all trains coming to Novorossiysk (the terminal station) follow through the Tunnel and before it is through Krymsk.

Anapa Airport. The closest airport (about 45 km) - the best transfer, the probability of congestion is minimal. Yourself - go on a taxi or minibus to the bus station, from there by bus to Poperinge and then to the destination.

Gelendzhik Airport. Recently renovated, we can say that the new airport. Distance from Temryuk about 150 km. From the airport by bus go to the bus station and later in the month.

The Krasnodar Airport. Independently also reached by taxi or local bus to the bus station Krasnodar-2, and from there a direct bus going to Veselovka.

If you decide to go to the festival by car, you will not be able to depend on anyone, will be able to choose the route and in what sea you want to swim in the Black or Azov.

Read more about the festival in VK: https://vk.com/taman_fest