Park Live is again the 3-day! 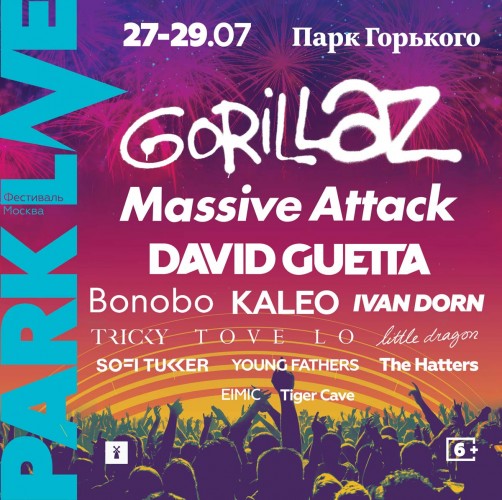 David Guetta will be headlining the first day of Park Live.

The most famous DJ on the planet will perform in the capital with his SuperCool show on Friday, July 27, just after sunset.

Ivan Dorn will perform on the same stage with David Guetta and Sofi Tukker July 27 at Gorky Park!

The headliner on July 28 will be the inimitable GORILLAZ!!! Their return is awaited by all the world! For the first time in Russia, the world's most popular virtual band: 2D, Noodle, Russel Hobbs and Murdoc Niccals - this will be the only performance in Russia!

The band Kaleo will perform before GORILLAZ!

The third member of the 28th of July will be Tove Lo - the incredible Swedish singer. Her music is a provocation!

The charming Tove Lo ignite in one day with the Gorillaz!

Perhaps the most striking phenomenon in recent years, the world of Russian music - The Hatters!

The headliner on 29 July will be the most influential band of their generation - Massive Attack! They raised trip-hop to its highest pitch, they won the hearts of millions and spawned dozens of followers. Massive Attack were always more than just a group. Amazing album, fantastic logos, great clips has brought them fame no less than the music itself.

This will be the only speech, and only on Park Live 2018! You have to be involved in the creation of the myth called Massive Attack!

Guru trip-hop - TRICKY will perform in one day with a Massive Attack!

Third day Live Park will complement another brilliant Briton, who will speak before Massive Attack Bonobo! This will be a live performance with musicians Bonobo - crazy improvisation and solo, which is famous for its group.

Promising Young Fathers will be the fourth members of the final days Park Live!

EIMIC will perform on the same stage with Massive Attack, Bonobo, Tricky, and Young Fathers on 29 July in Gorky Park!

For 5 years Live Park gained the status of international festival, this event has become a cult for thousands of people, United by love of music.

Park Live takes place in Moscow in 2013. It Park Live made available for Moscow not only dozens of world famous bands, but also opened several areas that later became key to Moscow's cultural life is the Industry square at VDNKH, and the stadiums as the Opening arena and web arena. In the summer of 2018 Park Live invites you to the Embankment of the Moscow river Gorky Park!

The headliner of the sixth Festival will be the inimitable GORILLAZ!!! Their return is awaited by all the world! For the first time in Russia, the world's most popular virtual band: 2D, Noodle, Russel Hobbs and Murdoc Niccals - this will be the only performance in Russia!

Creating its own unique style, Gorillaz were able to implement what many musicians strive for their entire careers. In the period from 1998 to 2010, the artists have released 4 LPS, gathered pocketed the eyeballs of the arena and received the most prestigious music awards.

On account of Gorillaz Grammy statuette for the same Feel Good Inc. and, a record 9!! nominations for other work. For 12 years they turned into an icon of world pop music, and releasing in The Fall of 2010, said goodbye to us. 7 years later, Gorillaz are back in business. This is the return that Billboard or NME would call "loud". Again rave reviews from music media and, again, a hundred shows, tickets for which sold out if it is your last opportunity to hear the band and to listen to, though, is that. After the lull, they returned with the album Humanz lasting 16 tracks and the length in genre life. In the new release, Gorillaz expertly put together pop, electronics, R'n'b and, of course, not without rock-n-roll. To work on Humanz your hands have made, without exaggeration, all the mods of the music world: Benjamin Clementine, Grace Jones, Rag'n'bone, Zebra Katz, etc. Humanz – career Gorillaz this is the case, when in over her head all the same really.

July 28 - the symbolic place of Moscow, the Embankment of Gorky Park! This will be the only opportunity to see the Grand return of GORILLAZ.

The details in the VC: https://vk.com/parklivefest