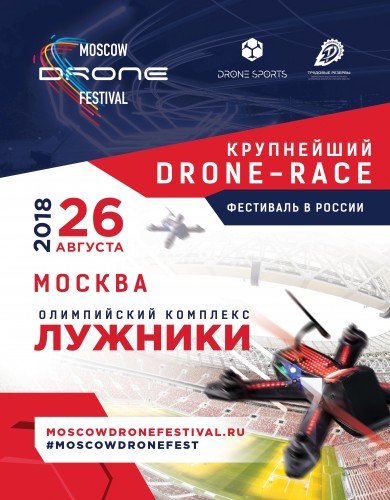 This summer, on 26 August in Moscow, on the territory of the Olympic complex "Luzhniki" will be the first drone-race festival in Russia – MOSCOW DRONE FESTIVAL. The event, designed to unite both Amateur and professional drone racing will be held under the auspices of the all-Russian sports society "Labor reserves" with the support of ROSTEC state Corporation, and the Department of sport and tourism of the city of Moscow. The festival is a company Drone portsGlobal. Official sponsor of the event – the technodynamics.

Drone racing is a young and high-tech sport, officially recognized in Russia discipline in the end of 2017 – today brings together tens of thousands of pilots and 75 million fans around the world. Among the largest international events of the sport world-wide fame gained in events such as Paris Drone Festival, Munich Drone Prix, World Prix Dubai Drone, Drone Prix Madrid.

Moscow Drone Festival is the Central event in Russia dedicated to the development of drone racing, unparalleled in magnitude and status. Due to the wide coverage and Federal support, this event will initiate the development of mass drone racing in Russia and contribute to engaging new audiences in this innovative sport. The first Drone-race festival in Russia, Moscow Drone Festival will combine three key elements of the program: the competition-qualification among Amateurs in the discipline of drone racing, a fan program for fans and guests of the festival and the race the world's strongest professionals of Russian and foreign racers. In the part of entertainment fans and guests of the festival offers educational workshops for management, modeling and Assembly of drones, virtual rides for adults and children, a show-program, vystupleniyami

DJs, fireworks with live video from drones and other activities. The festival will gather on the territory of "Luzhniki" at least 5,000 people. It is expected more than 250 registrations of pilots of the Russian Federation for the race-qualification, and at least 30 of the strongest pilots of Russia and foreign countries. The finals will have 8 prizes. The total prize Fund for the race will be 2 500 000. In addition, all winners will receive a gaming console XboxOneS. This is the optimum entertainment for the whole family, which supports HDR in games, can play movies in 4K UltraHD and offers the hard disk drive of 1TB.

THE PROGRAM OF THE EVENT:

Drone Sports Globalis a team of event organizers at drone racing, formed under the auspices of the society "Labor reserves". This is the staff of the best Russian pilots and trainers from the industry who train the beginners and lovers of drone racing to training bases across the country, organize a year-round regional qualifying and title