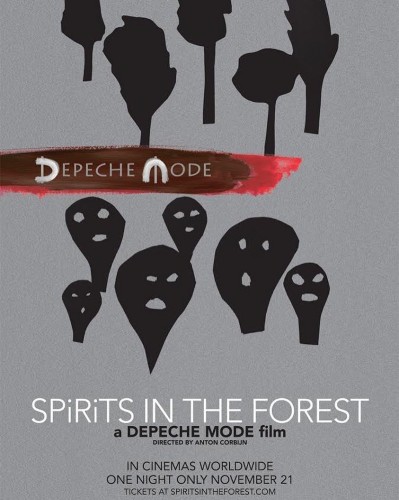 In theaters worldwide on November 21. In Russia, the film produces Nevafilm Emotion. Tickets on sale from September 26 to spiritsintheforest.com and cinemaemotion.ru.

Depeche Mode in conjunction with Sony Music Entertainment and BBH Entertainment are pleased to announce the upcoming release of a new full-length concert film "Spirits In The Forest," shows which will be held in cinemas around the world on 21 November 2019. This unique event will unite fans in more than 70 countries.

The film was directed and cult groups videographer Anton Corbijn, who followed Depeche Mode in their massive "Global Spirit Tour". This tour, consisting of 115 unforgettable show, visited a total of more than 3 million fans.

Plunging into the deeply personal stories of six fans of Depeche Mode, the film impresses with exciting musical performances, filmed at the final show of the tour in Berlin's famous waldbuhne theater. Recorded on the camera material reveals the secrets of the popularity of the group and presents the author's view on the incredible power of their music, which uniquely unites people around the world, despite the languages, gender and age.

"I am proud that I can share this film and this powerful story. It's amazing to empathise with the real stories of people who are affected by our music," said Dave Gahan.

Tickets for "Depeche Mode: Spirits In The Forest" will go on sale September 26.