A course on the Baltic sea! "Lifts" are going on a vacation to Kaliningrad 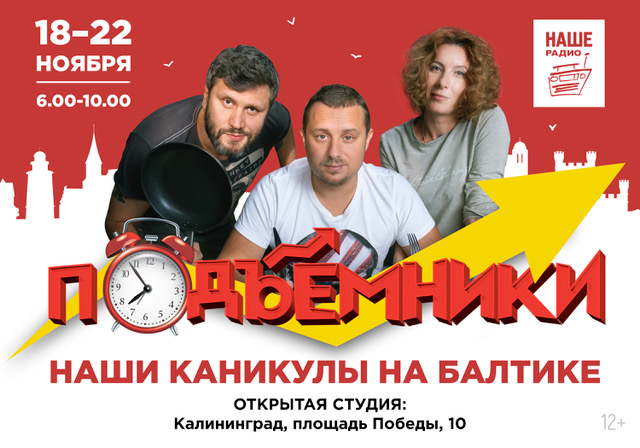 Morning show "Lifts" in full force to leave his native Moscow the Studio and go on a vacation in Kaliningrad. From 18 to 22 November leading "Our Radio" Alexander Bon, Tanya Borisova and Igor Pankov will be aired in the whole of Russia of open Studio at Victory square, 10 (hotel Radisson Blu).

Essential and excursion program "Lifts" these 5 days will be intense. To help get acquainted with the most unusual city in Russia, to reveal its intriguing mysteries to them will be some open Studio – famous people of Kaliningrad.

But that's not all. To better take in the sights of Kaliningrad and to meet with the audience, "Nashe Radio" on Saturday, November 23

"Lifts" will go to the final match round of the national Football League for FC Baltika - FC Mordovia.

Relevant details about who will be the guest of the ether, where and with whom will leave the leading "Nashe Radio" on tour can be found on the website www.nashe.ru and social networks stations.