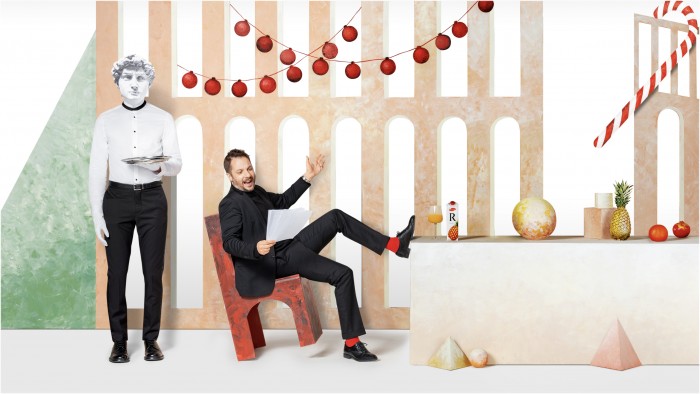 Photo source:
The press service of the art project

The creative team together with the organizers of the project, consisting of star photographer Ksenia Taurinas, art consultant Tamara Volkova and the chief decorator of the Bolshoi Theatre Dmitry Velkovskogo created a unique mural, inspired by the works of Italian artist Giorgio de Chirico.

The participants of the art project – 7 figures of culture and art: Maksim Vitorgan, Alexander Tsypkin, the lukeria Ilyashenko, Maria Monogarova, Vlad Lisovets, Evgenia Obraztsova and Elena Temnikova. They become part of the panel, creating a common visual subject of a new, creative format of the celebration of the New year. But, even being part of the same pattern, each of the heroes project is presented in its unique colourful way.

The characters spoke about how they bring in such rich traditions of the holiday as New year present art. And each of these stories represents one of the flavors of juice. Playful as a pineapple taste, a wish from Aleksandra Tsypkina, or bright and invigorating, like orange juice, advice from Maria Monogarovo – everyone can find in the project inspiration for your New year.

A panel will appear on one of the largest and most spectacular screen of the capital - on the media-facade of the cinema “October” on Novy Arbat. It in the animated versions of the panels all the characters of the project are set in motion and interact with each other. The art project will also be shown on other media facades in Moscow and St. Petersburg.

"The art of celebration" is a project which demonstrates that with creativity and inspiration, even the traditional occasion can be a real art.