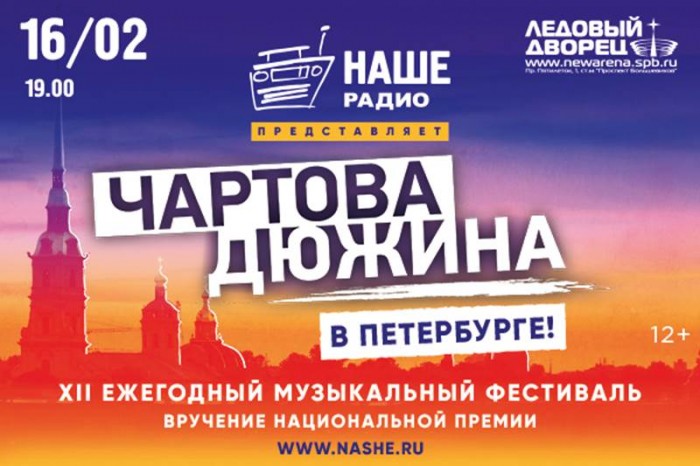 Photo source:
The press service of the organizers of the festival

For the first time in the 12-year history of the Annual music award "chart Dozen" will be held at the epicenter of the birth of Russian rock music – St. Petersburg!

Turning to its roots, in 2019, the national awards ceremony will be moved to one of the most spacious venues of the Northern capital, "the Ice Palace". Large-scale show will highlight all the achievements of the domestic music industry over the past year and unite on the same stage as legendary artists, and young brilliant performers, falling on top of the eponymous hit parade in 2018.

The updates on the website nashe.ru and social networks radio station!

Reference event: the Award "chart Dozen" was established in 2008 To 2011 it was awarded at the festival for the voting of the three nominees selected by the jury. All awards are presented in 8 main and 5 special categories. During the existence of the "Chart Dozen" winners of the popular vote became the most prominent and important musicians of the country. Including the record obtained by the number of nominations number of groups "DDT", "Alisa", "Korol I shut", "Mumiy Troll", "spleen", "Leningrad" and other popular artists of the country. The award ceremony attracted a full house at the spacious venues of Moscow, in "Crocus Hall" and "Olympic".

On January 15, the lead singer of the 7Rasa group presented the first single of his new project Rastich
Work on the material for the new project "Rustic" began in the summer of 2020
Temiko 1 day ago