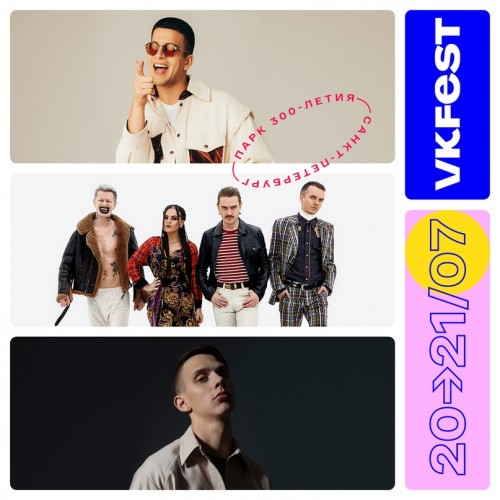 VKontakte and Radio Record announce first participants in the program 2019 VK Fest is a Little Big, ATL, The Hatters, Bread, Tim Belarusian, Tree, Elena Temnikova, Obladaet, #2Маши, Feduk, Lizer, Olga Buzova, Stairs, Diana. Night Snipers, CYGO, Zivert, Eldar Dzarakhov, HammAli & Navai. The festival will be held 20-21 July in the Park of the 300th anniversary of St. Petersburg and will be held in the jubilee, for the fifth time.

The festival traditionally invited the artist most often listened to users of Vkontakte for the last time. For example, romantic rapper CYGO — author of the song Panda E known to many as "song of cheetahs" and became the most listened in 2018 in the services VK Music and BOOM. Also the line-up — Tim Belarusian, whose rise to the top of the charts with "Wet crosses" and "forget Me not" were among the sharpest in Russian-language pop music. The festival will feature hip-hop Duo HammAli & Navai, whose album JANAVI was No. 1 in number of auditions in the ecosystem and the VK BOOM at the end of the year.

Later, Vkontakte and Radio Record announce other artists as well as entertainment and educational programs. VK Fest guests will be able to meet up with popular bloggers, listen to interesting speakers, participate in games, contests and master classes.

Tickets for the festival can be purchased via the link (vk.cc/tickets). All relevant information about VK Fest 2019 — in the official community Vkontakte: https://vk.com/fest

This year VK Fest will be held for the fifth time. During this time, the festival became the town's popular open air in Russia. The program of the festival combines current trends in different fields: from music to blogging to video games and technology. In 2018 for VK Fest featured more than 50 artists, organized more than 350 interactive sites. The festival was visited by 90 000 visitors, and video stream VK has collected 1.7 million views.