The play "Rikki-Tikki-Tavi" on 7 July in Saint-Petersburg 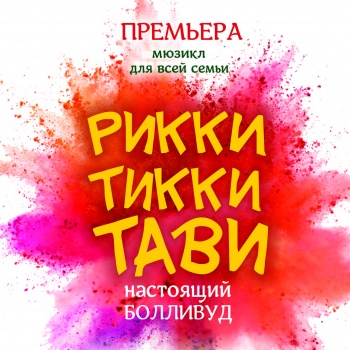 A musical play based on the story of Rudyard Kipling's "the Jungle Book". Compelling story becomes the embodiment on stage of Variety Theatre in the style of modern bollywood!

Young actor will tell about courage, friendship, loyalty to his word, the need to protect the weak and respect for elders. The adventures of a brave mongoose will tell you amazing language songs and Indian dance. Young theater-goers will plunge into the atmosphere of celebration. Parents also play remind you of the classics of Indian cinema: fun story will sound by the rhythms of bollywood.

According to the Director, brave Ricky falls into the British family and the family of the Raja, and becomes the best friend of the heir to the throne. Thus the war, which alone will lead the hero acquires an unprecedented scale and allegorical meaning – it's in the play will be about the confrontation between human kings and the kings of the snake. So, about the confrontation of two worlds: human values, high ideals and the snake principles of lies, deceit, fraud.