The premiere of Igor Rasteryaeva "what farce?" 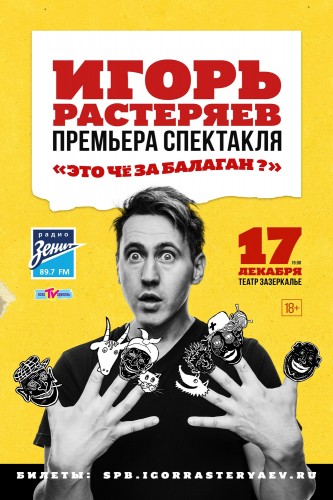 Igor Rasteryaev will present a solo performance "what farce?" in his eponymous book. The premiere will be held on 17 December on the stage of the St. Petersburg musical theater "Zazerkalie".

Igor Rasteryaev is known as a distinctive musician-accordion, whose songs "Combine", "Russian road", "St. George ribbon" has long been popular, and the breadth of mental impulse and expression of performance at concerts has won the love of thousands of viewers across the country.

But few know that the education Igor theater actor. Having worked in theatre for twelve years, he did not abandon the desire to return to this craft. For the General public this power – a new Chapter in the biography of Igor Rasteryaeva, where he acts not in the role of musician, as a writer, composer, artist and the only actor.

The story "what farce?", which will be officially presented at the show, Igor wrote 17 years. In the work, details the fate of the Russian provinces at the turn of the dashing 90-ies and 2000-ies. The reader is immersed in the familiar "the Quiet don" the scenery of the farms of the Volgograd region a hundred years later to see what happened to these scenic places in southern Russia after the collapse of the Soviet Union to the present day.

According to the author, this is painfully topical theme, unfairly receives little coverage in relevant literature and contemporary theater. In his book, he tried to discover the current problems and prospects of residents of the former Cossack farms without any Patriotic illusions and feigned optimism. However, Igor said that the book and the show are thinking kind, honest, without speculation and moralizing. The reader is waiting for a mosaic of stories and destinies – sometimes funny, sometimes sad, but always candid and truthful.

The Director of the play was a classmate and close friend of Igor – Yuri Evdokimov.Sound and lighting of the performance was entrusted with the technical crew of the Dolphin: smetoniene Andrew Lucarino and sound engineer Alexander Mayorov.

The book contains a large number of author's illustrations, draw that Igor started in 2002. The stage space of the theatre "Zazerkalie" will be in real time to be transformed using the technology of projection mapping to make more sketches in the full scenery.

Another feature of the novel and the performance is the efficient use of the living Russian language with the dialect, and even a moderate inclusion of obscene language, without which, according to the author, to describe events simply will not believe.

To enhance the atmosphere performance, some scenes will be complemented by rollicking lilt of the familiar bunching. Especially for this show, Igor wrote some new songs.

We wait for all on 17 December in the music theatre "Zazerkalye" at the premiere of the performance "what a farce?" and the presentation of his debut books of Igor Rasteryaeva.