Interview with Jennifer Haben (Beyond the Black) about music, popularity and dream team

Beyond the Black is a young band but during the gig of Beyond the Black at the Wacken Open Air festival we could make sure that the band has a big army of fans. After it MESMIKA spoke with Jennifer Haben, lead vocalist of the band.

You and the rest of the band was parting ways on July. What was the reason and how did you choose new members for your band?

Jennifer: The reason was that we are becoming international, we're just new, we couldn't go together anymore, because of personal and professional things. They said, “We can't go with you” then I said, “We have to go for it.” I'm just making an audition on the 10th of August in Berlin. Then I will get new band members.

You are a young band but you are very popular. Tell us about your feelings when you understood that you are popular and when you were invited to a big festival like Wacken.

Jennifer: I don't think that I'm so popular, when I went today at Wacken I said, “Oh, my God! There are so many people! That’s so great. The people know me.” That’s the only time I think I’m popular. Wacken is the first time we had gig ever at a big festival. I just said, “No, it couldn’t be!” But it was like this, they said Beyond the Black has to play at Wacken, and it was so great and awesome.

Nowadays very many new bands appear every day. Is it difficult to start your own project?

Jennifer: Against difficulties… I have to say, I just was five years when I created some songs in different music ways. At the beginning of 2014 I just decided to make symphonic metal, and make it harder than before. It’s important to have a great team. I think when you have a great team everything will work.

I think it’s very difficult to find a dream team.

Jennifer: Yes, you have to find you wanna go with. They have to love you, love your music, and say, "Beyond The Black is so good", and everyone has to listened to it and then you have a great team.

What bands influenced your music?

Jennifer: When I was young I just listened to Evanescence, Nightwish and Within Temptation.

Is music your hobby or it takes all your time?

Jennifer: It takes all my time. It’s not my hobby, I make music since I was five, and I don’t have anything except music.

Do you have any hobby?

Jennifer: No, just music, love and family. That’s three things I make in my life.

Did you like to take a part in Rock Meets Classics?

Jennifer: Last year we were at the main stage with them with two songs "In the Shadows" and "Rage Before The Storm" at the Wacken 2015. It was awesome, so many people (more than today) listened to Beyond the Black. You can't realize that.

On your official web site there is the information about the collaboration with Scorpions. Tell us about this.

Jennifer: I've listened to Scorpions since I was young and I love all songs. My favorite song is Send Me An Angel. It’s so great to hear that we can play with them. We had five shows with them together.

Do you have any plans to go to Russia?

Jennifer: I hope that we can go there soon but I don’t know when. Next year we’ll make a big European tour, hopefully we will be there. Let’s see.

Did you receive any unusual gifts from your fans?

Jennifer: It was a little unicorn made of metal. It's so sweet it was a gift I got for Christmas.

Some words for the Russian fans.

Jennifer: We will come soon. Beyond the Black likes you. Hopefully you like us and let’s party. 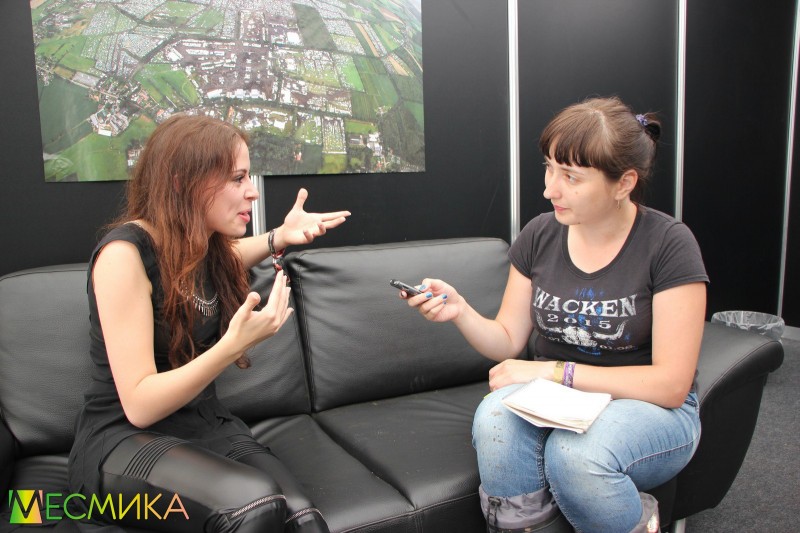 You can find the photos with Beyond the Black at Wacken Open Air 2016 here.