Interview with Mind Driller: Ritual - is a metaphor to encourage oneself to be stronger 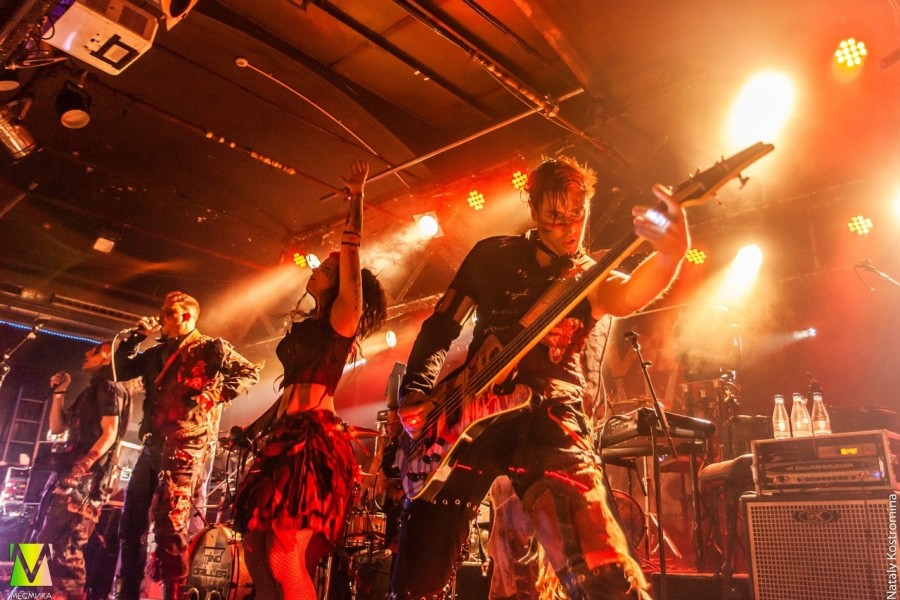 Due to release of the new album "Involution" by Spanish industrial band Mind Driller, Mesmika portal spoke with the lead singer Estefania and found out who are the authors of the lyrics in the new album, which one of the group members love Arabic culture, and the group's attitude to electronic music style.

My congratulations on your new album Involution!

Who wrote the lyrics for songs in your new album?

We’re glad the you liked the album! The songs were written by us, the three singers: V, Daniel and me. We write individually but as a team, for example, I’ve written parts that are sung by V and the opposite, or V has written some of the lyrics that are sung by Daniel.

What inspired you to write The Last Drop?

Well, this song is one the ones that V wrote and it’s inspired by that feeling you have when you’re about to run out of patience and you say, this is enough! This normally happens when you give too much of yourself to other people but you receive nothing instead.

You play rather heavy music in the style Metal Industrial. Would you like to

try making music in a lighter style, for example, electronic?

I don’t know about the guys but in my case yes, definitely. I’ve always said that if I wasn’t playing in a metal band I would probably be part of a softer and whole different project like the style of Aurora, Bat for Lashes, Florence and the machine… and I’d love to take part in a music project like those I mentioned because I love electronic, dark and ambient music.

In Wo Ist Dein Gott? you traced Muslim motifs. This song is a little out of

your style. Who is the author of the idea?

Funny you asked about this because there’s a story behind, for sure. Our bassist, Pharaoh, loves all the arabish culture so he was like “Why don’t we make a song with arabic vibes?” and Javi, who’s the main instrumental composer, refused to at first, but Pharaoh insisted very hard so Javi made the song in the end and is actually one of our favourites.

What ritual do you describe in the song Ritual?

That is a good question. Ritual was the first song to be composed from this new record and same with the lyrics. Indeed, no Ritual is specified, it is a metaphor to encourage oneself to be stronger despite the adversities in life. Sometimes, when I think about all the negative stuff that happens to me I feel like I’m cursed, or someone is doing voodoo on me but that leads me to be stronger and better.

Your every stage performance is a kind of a theater show. Have you ever

Yes, that’s right. Hopefully, one day we’ll have enough money to able to do so haha that would be awesome.

Question to Estefania. You are the one girl in a band. Do they feel good in

Do I feel good in company of boys? Sure! I’ve always been surrounded by boys so nothing new or strange haha I think we have a great time together.

You played with Oomph! supporting their new album Ritual. What are yourimpressions?

Our impressions are beyond good! We never expected the situation as it was. We had a great experience playing with them; they’re great musicians but also very nice people so everything was perfect. Both days we had the opportunity to talk backstage and exchange impressions about one another and it was really cool. We hope we can tour longer with them next time.

Please tell us about the plans for the upcoming summer.

This summer we’ll be busy with our Involution Tour around Spain and the highlight will be to play at Leyendas del Rock in Villena because is one of the most important festivals in Spain so we’re really looking forward to it, bands like Avantasia, Apocalyptica, Cradle of Filth or Lacuna Coil are heading the festival. If you’re interested you can check all the tour dates in www.mind-driller.com

Your wishes (message) to your Russian fans.

We want to thank Nataly for this interview and greet our russian followers. Thanks for the support and we wish very hard to be able to play there for you and meet you. Take care!