The Bohemians March 8 in Smolensk 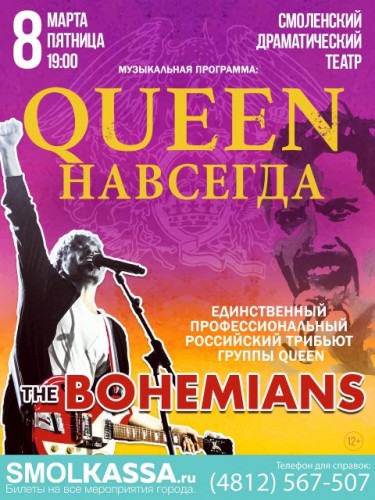 March 8, 2019 will be a concert of one of the most prominent and successful Russian tribute band, THE BOHEMIANS, dated for day of memory of the legendary Freddie mercury.

Name Freddie mercury linked the success of the legendary QUEEN. Freddie mercury made in the world musical heritage, the contribution of such songs as “Bohemian Rhapsody”, “Love Of My Life”, “Friends Will Be Friends”, “We Are The Champions ” and many other rock anthems on which grew several generations of fans, remains one of the most prominent legends in the music world.

The only professional tribute band QUEEN is considered the Bohemians, acting on the Russian stage for over 12 years. Over the years of its activities the group has earned a reputation as the best tribute band, largely due to the fact that the participants of The Bohemians refused to use masquerade and a kind of theatrical show "under the Queen", don't copy on the stage the characteristic movements of Freddie mercury, but honestly, professionally and sincerely pay tribute to the Legend. The majority of participants “The Bohemians” at the time, was personally chosen by Brian may and Roger Taylor for the Russian production of the musical “We Will Rock You” and as said Brian may: “The quality of these talents is unbelievable”. And indeed it is. At the concert The Bohemians will sing the most famous hits of QUEEN, and less known to the public works, but nevertheless valued by the admirers of the "Queen".

Viewers can appreciate the live sound of QUEEN songs which never performed the classics of rock live: Innuendo, Don't Try So Hard, You Don't Fool Me Too Much Love Will Kill You etc. Always 100% live sound, awesome guitar, crazy energy and charisma of the vocalist, the participant of the show voice 6 David Todua, conquered the audience from the first minutes of the concert, bringing the audience during the reign on the world rock scene in the Freddie mercury...