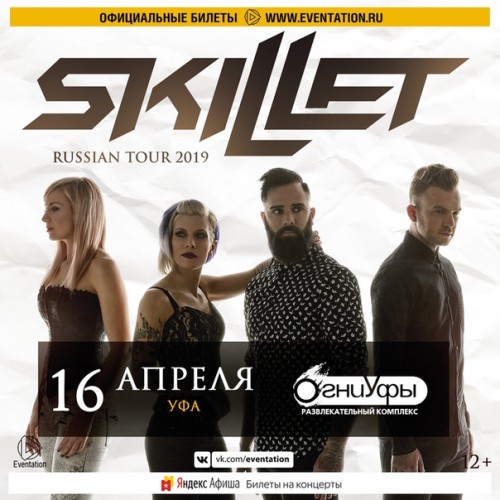 In April 2019 SKILLET Russian fans will appreciate its bright and loud show where they will perform not only the greatest hits, but the long-awaited news from the upcoming new album!

Soon will be known the release date and the name of the new 10th album and singles from their new album.

SKILLET – one of the most successful rock bands in the XXI century. Since 1996, the band managed to record 9 albums. To date, worldwide sold more than 11 million copies of disks SKILLET, album "Comatose" (2006) and "Awake" (2009) deservedly received platinum status and the album, "Rise" (2013) has reached gold status.

During its history the BAND was nominated for many prestigious awards such as Grammy, Dove Awards, WMA and BMI, their songs occupy the top positions of the Billboard charts and dearly loved by millions of fans around the world!

In 2016, the BAND released their ninth Studio album, "Unleashed". The long-awaited album broke into the top of the Billboard charts and was happily adopted by fans of the band. The single from this album - "Feel Invincible" was certified gold. In 2019, the band SKILLET promises to please their fans with a new full-length album!