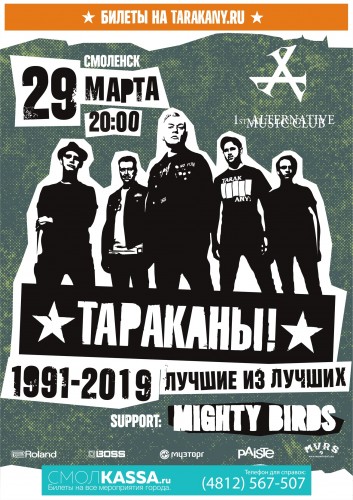 In the spring of 2019 one of the most brilliant and beloved punk rock bands in the country, the group "Cockroaches!", again perform in Smolensk after a long sabbatical!

On vacation a rambunctious musicians don't waste any time: released on digital platforms the result of his daring experiment, "Much ADO about nothing", split with Israeli band Useless ID, the English version of the last numbered album "Power of one" - "The power of one", presented a collection of new merchandise, CD and vinyl with the latest release, removed the clip, and also prepared a lot of surprises for their fans for 2019.

The History Of Cockroaches! - more than 15 Studio albums, countless singles, and over 30 video clips of the first places in the radio charts and concert vast geography that stretches across the territory of Russia, near and far abroad.

No matter how transformed the performing manner of the "Cockroaches!", from the bold dynamic punk rock inspired by the music of the Sex Pistols and Ramones, to California pop-punk, Russian rock scene, the group has always had a unique style and huge number of loyal listeners of all social strata and ages.

At concerts the group will play a 2 hour set of their best hits of all time, songs from "Much ADO about nothing" and tracks that have not performed at concerts, but not forgotten, and loved by loyal fans of the team. All this is complemented with a new impressive light and video show. Live performances of "Cockroaches!" is invariably splashing energy, it is youth and sincerity, is a huge energy boost. After all, it's supposed to be real rock music!