Mongol May 23 in Smolensk 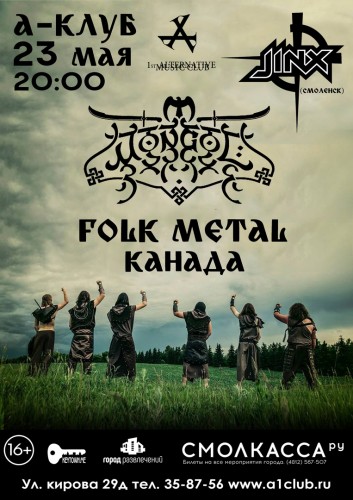 May 23, And the Club most powerful metal action in two parts!!!
MONGOL (Canada) / JINX (Russia)
Born on a cold canadian plains of Alberta, the team of the Mongols tells us about the Ancient Mongol Empire! Combining heavy melodic riffs in the spirit of Melodic Death Metal with lots of folk instruments and Eastern melodies, Mongolian sounds as diverse as the peoples who were conquered by the Mongolian Empire!
For the first time in Russia, the group is bringing a new album, telling of an ancient mystical legend of the return of the great Khan to power!
https://www.facebook.com/MongolCanada/
https://www.youtube.com/channel/UCq502ybCqKI1H4Y45nF5..
JINX (Smolensk) https://vk.com/jinx_band
Group JINX is one of the oldest groups of Smolensk, formed in July 2000.
The band played a lot of concerts in his hometown and beyond:

Desnogorsk, Roslavl, Vitebsk, festivals "Safonov", "Heavy Water", "Freedom Metal Festival", etc., the photo with the most memorable in the band.