Tarja Turunen on 23 September in Ufa 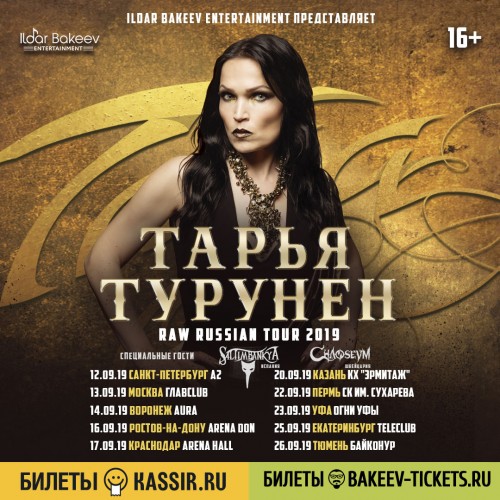 Listen to the album: http://band.link/U65tc

Hard and very honest album, "InTheRaw" - the seventh solo singer Tarja Turunen. Three years after the release of "TheShadowSelf" (2016)Finnish rock diva is releasing a rock album, which, in her words, "as ever, bares her soul". The new LP reveals a real world Tarja – its true, very vulnerable and aggressive nature. On the album loud metal guitar riffs blend harmoniously with valkyrians voice of Tarja, emphasizing its three-Octava power. The texts are full of details from his personal life.

"The guitar sound on the album is very straightforward, says Tarja. — Hits the nail on the head! It is ideal for a strong voice that needs to something no less powerful was behind him."

When you create a "IntheRaw" the artist was inspired by the famous saying about gold, "all is Not gold that glitters."

"Not all gold glitters necessarily, says Tarja. —When we think about this noble metal, we make something perfect, refined luxury. But in its natural state it is rough natural material". The singer has applied this idea to themselves and to the new album. By analogy, "IntheRaw"represents the innate aggressive and vulnerable at the same time the essence of Tarja. On the new disc, her refined and noble academic voice frames coarse and heavy music core.

The lead single to the album was the song "DeadPromises", released on April 30.In the recording of "InTheRaw" participated Cristina Scabbia LacunaCoil from, Bjornstad from Soilwork, and Tommy Karevik from Kamelot.

The track listing for "IN THE RAW":

7. Spirits Of The Sea

12 Sep Turunen together with the rock band will go on a big concert tour in 10 cities of Russia. Tarja will tour St. Petersburg, Moscow, Voronezh, Rostov-on-don, Krasnodar, Kazan, Perm, Ufa, Yekaterinburg and Tyumen. People in our country will hear the first live performance of new songs from the Finnish diva, accompanied by a rock band. Also, the artist will delight fans with hits from previous albums.

Schedule of the tour RAWRUSSIANTOUR 2019

The organizer of the Russian round of Tarja Turunen company Nazli D. Bakeev Entertainment. Since 2003, she carries out projects in the areas of classical, popular and rock music and theatre-acrobatic show throughout Russia.