ScHoolboy Q will perform on February 22 in Moscow 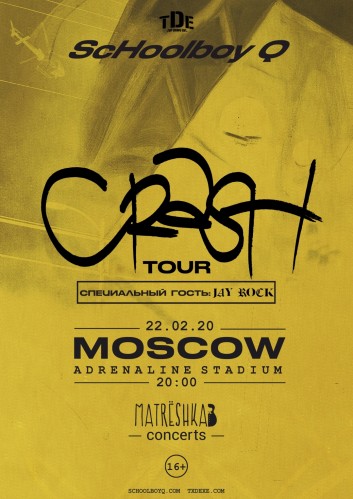 One of the brightest stars of hip-hop, Schoolboy Q will perform an exclusive concert in Moscow!

The future rap star from Los Angeles, was born on a military base in Germany. Hanley (real name Schoolboy Q) held that the child that is not expected of any musical career.
Despite the fact that he was a talented player, he became embroiled in a street gang. This path ultimately would have ended in prison, if at the age of twenty-one years, he did not give vent to their accumulated aggression, starting to create music.

In 2008, Schoolboy Q released his first mixtape "Schoolboy Turned Hustla", which was soon followed by the second "Gangsta & Soul". In January 2011, Schoolboy Q released his debut Studio album titled "Setbacks", which has taken a worthy place in the American Billboard 200 chart.
This album was followed by "Habits & Contradictions" in 2012, recorded with artists such as Kendrick Lamar, Jay Rock, Glasses Malone and Ab-Soul.
Although Schoolboy Q admitted that he was influenced by artists such as Biggie, Nas and 50 Cent, he claims that he got his richly rhymed equipment from superstar mega-rap Jay-Z.

New and the fifth album "CrasH Talk" has become for ScHoolboy Q perhaps the most serious challenge of his career.
The former gangster, who became the brightest star rap West coast, had to redo their work because of unfortunate events.
First, Schoolboy Q rocked the death of a close friend of Mac Miller, then the release was delayed due to the death of Nipsey Hussle. On "Crash Talk" star gangsta rap is reviewing its past and present, opening up to fans in a new way. He look differently at your criminal experience and starts talking about the harmful effects of drugs. The artist remained the same outspoken, hard and brutal, but he now has other values — not fame and money, and the child, family and faith.