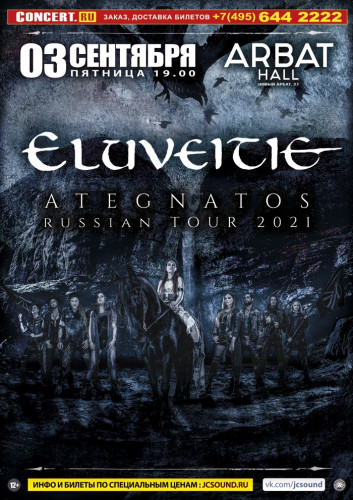 ELUVEITIE are back! The main Celts modern metal scene will visit Moscow in April 2020.

Born in the heart of the Swiss Alps, the team of Kigelia Glanzmann at the time firmly occupied the place of honor in the League of extraordinary folk metal bands, and still not going to give it to anyone. Seriously absorbed in Celtic mythology and Gaelic history, ELUVEITIE have become real masters of their craft and quickly gained the love of the people in different parts of the globe.
Starting with the debut and in many ways innovative album "Spirit" (2006), every year the musicians reveal new facets of his work, imaginatively expanded set of folk instruments, not limited to only the principle of "let's add some pipes". Well, the pressure and the metal strength of the team to this day the envy of many masters of Swedish Melodic Death. In 2019, the group released their eighth Studio album, "Ategnatos" to prove that now the pagan spirit and the beginning of metal music ELUVEITIE as strong as ever. Moscow presentation of the new product, with the most significant hits of the collective, will take place on 3 April in the club "Arbat Hall".
The signature sound of the band often copied, but nobody can convey its uniqueness to the full. This applies invariably charismatic and energetic performances of the team, guaranteeing a full immersion in the mysteries and the mysticism of the era of the Celts. Don't miss perhaps the most atmospheric concert of the year 2020!