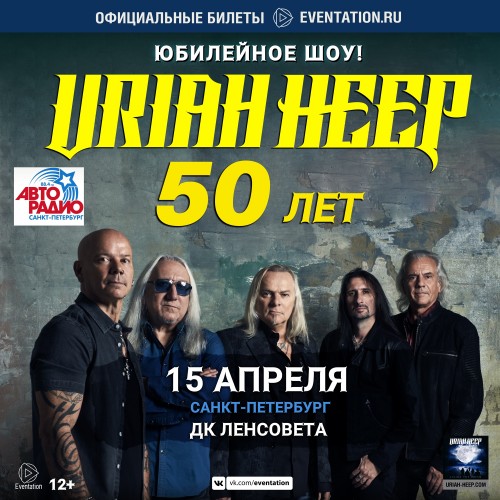 URIAH HEEP legends classic hard rock, returned to Russia with jubilee tour in honor of the 50th anniversary of musical career! The authors of the cult songs Easy Living July Morning and will perform in Saint-Petersburg and will perform favorite cult hits!

Along with the iconic Led Zeppelin, Black Sabbath and Deep Purple, URIAH HEEP played a significant role in the development of classic hard rock. The band's debut album Very ‘Eavy, Very ‘Umble marked the emergence of a new mass musical movement, which will rule in the 70 years of the twentieth century and will only strengthen its position in the 80s

URIAH HEEP – a tradition of high-quality original progressive hard rock, forged in the beginning of the Golden racing era.

URIAH HEEP – the musicians who became "fathers" to more than one generation, and influenced the work of such groups as Queen. In music, URIAH HEEP, endured many trials, both time and fame that everyone finds something of their own. Someone high-pitched vocals in the tragic ballad, someone incredible power in the epic battle of the story, and the other is the legendary and unique fatal execution.

In an interview to 2018 is the founder and permanent leader of the band Mick Box on the question about a possible tour across Russia, said: "Other cities have plans, but while Moscow and St. Petersburg", and in the spring of 2020 without exaggeration cult musicians URIAH HEEP return to Russia with large-scale concerts in 14 cities to remind you what a real classic hard rock!