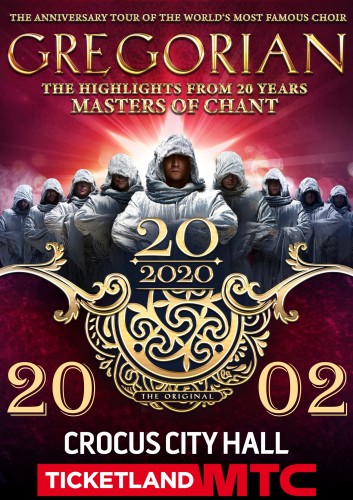 The team will present a grandiose show where spectators will dive into the major creative milestones the successful Gregorian choir on the world stage.

The famous orchestra will present an unprecedented scale of the show, including twenty tons of scenery, costumes, sound, lighting and pyrotechnic equipment that will Eclipse all that the group created before.

The first seeds of the concept of "Gregorian" were sown the Hamburg music producer Frank Peterson after a trip to Royal monastery of San Lorenzo de El Escorial in Spain in 1989. The medieval monastery and the castle made an indelible impression on him. When he walked through their territory, listening on your player of contemporary music, such a sharp contrast sparked the initial inspiration to experiment in mixing the ancient Gregorian music with modern pop and rock hits.

A pilot project in this direction became the famous band "Enigma", which Frank Peterson founded together with renowned producer and musician Michael Cretu.

In 1999 the project "Gregorian" was finally formed as an independent musical act and the first album "Masters Of Chant" turned into a phenomenal success. In subsequent years, "Gregorian" has sold 15 million records worldwide, and their concerts were visited by over 2.6 million viewers in 31 countries across the world.

"Gregorian" repertoire consists of nearly 250 songs, ranging from classical music of the middle ages, ending with the pop and rock standards of the last 40 years, up to the masterpieces of such "heavy" bands like "Metallica" and even "Rammstein".

In 2020, "Gregorian" is celebrating its 20th anniversary and announces extensive world tour. More than two-hour programme will showcase the most important musical milestones of the unprecedented career of the most successful of the Gregorian choir in the world. More than twenty people on stage including choir, accompanied by string Quartet and rock band, amazing performances from Amelia Brightman and Narcisa, will create an incredible atmosphere incredible, mystical and memorable show.