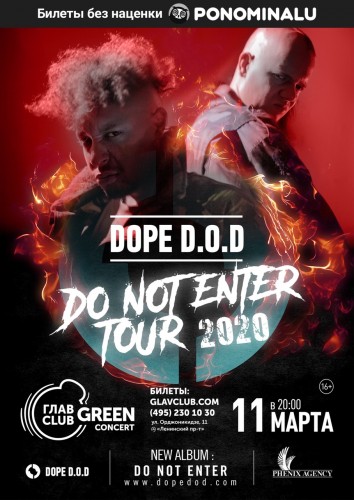 Dope D. O. D. - hip-hop group, founded in 2008 in the Dutch province of Groningen, although its strong DNA, you can find American, English, and African roots. On both sides of the Atlantic Dope D. O. D. became famous thanks to the video "What Happened" - has earned 30 million views on YouTube and attracted to the band to the attention of the heavyweights of the caliber of Korn and Onyx.

Korn (pretty much anything), the Dutch warmed up, but Onyx still work, recording with new Yorkers joint album "Shotgunz in Hell" record, effectively bringing together two generations of hardcore rap. Ahead - the new adventures: another Studio album "Do Not Enter" and a large-scale European tour in support of it.