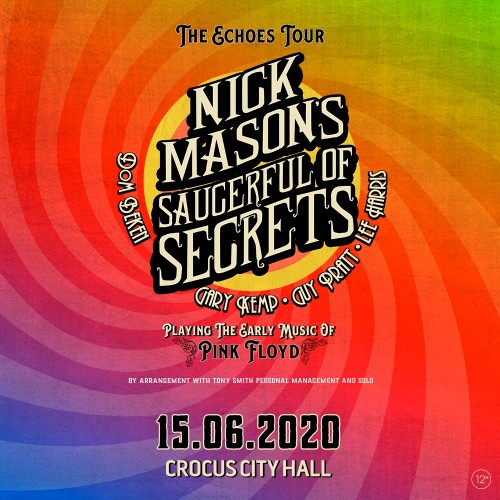 Nick Mason will bring "Saucerful Of Secrets" in the framework of the European tour!

The long-awaited news for fans of Pink Floyd:
"Saucerful Of Secrets" nick Mason will perform in Moscow on 15 June 2020 in Crocus City Hall c program "The Echoes Tour"!

Nick Mason, one of the founders and drummer of the cult band Pink Floyd, needs no introduction. And that he will present in Moscow the project "Saucerful Of Secrets". After 25 years of waiting in vain the reunion of Pink Floyd, Nick Mason Floyd did on their own, than made a great contribution to the legacy of the band, and it was all very authentic.

Show with Nick Mason is not a tribute and has nothing to do with nostalgic tours different honored musicians is a real revival of early Pink Floyd with their mesmerizing pristine psychedelic sound that allows you to rediscover the uniqueness of Pink Floyd. The show literally permeates the spirit and energy of the 60-70s, and brings the viewer into the era, where the group worked, experimented and produced a huge array of first-class material.

"Saucerful Of Secrets" nick Mason had his first show in London in may 2018. It was nick's first tour since Pink Floyd in 2005 he performed in London at the Live 8 festival. "Saucerful Of Secrets" nick Mason continued to gather full houses around the world, including three nights at London's Roundhouse, where Pink Floyd did some of his most revered show in the early 1960s. In round 2020, the group will further expand its repertoire and will play a song from early Pink Floyd up until the 1972 album "Obscured by Clouds".