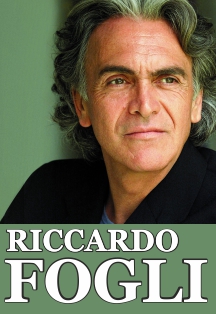 Riccardo Fogli, an Italian singer, born October 21, 1947, in the Tuscan town of Pontedera. Since childhood, fond of music, fascination with the Beatles, has identified his desire to become a musician.

Voice Riccardo fond of many people in Italy and abroad. In 1981, goes the famous song Fogli Malinconia ("Melancholy"), and in 1982 the song was written Storie di tutti i giorni ("Everyday stories"), which became the "calling card" Riccardo Fogli and forever put his name in the history of Italian music of the late 20th century. With this song, the singer won the festival "Sanremo" in 1982, ahead of even the duet of al Bano and Romina Power with their famous song Felicita (Happiness).

With this song starts a world-known Foglia. His 1982 album Collezione (Collection) was issued in millions of copies in the countries of Western Europe and even in Japan, and immediately after its publication in the USSR was literally swept away from counters. Since then, Riccardo Fogli appeared in Russia a lot of fans, and the singer is constantly taking in these concerts, as "San-Remo in the Kremlin" and "melodies and rhythms of foreign music in Russian." In 1983, Riccardo Fogli represented Italy in the Eurovision song contest with the song Per Lucia ("For Lucia"). In 1988-1990 come discs, the songs of which were included in the top ten at the festival of Sanremo. The album "Amori di Guerra" (1988) is one of the best in the career of the singer.

After recording a live concert in 2002, Riccardo Fogli the winner concert of the reality show Music Farm in may 2004. The 2005 album "will be Ci giorni migliori" ("there will be better days") earned him a Special Award Venice Music Awards.

The melodic and reverent songs of Riccardo Fogli (Riccardo Fogli) win the hearts of grateful listeners, prompting them to rejoice and to be sad, to dream and to dance. Unsurpassed manner of performance fascinates fans of Riccardo Fogli (Riccardo Fogli) special male charm. An inexhaustible love for music, beauty, women and life constantly nourishes the creative power of a talented performer and composer. Songs like "Sulla Buona Strada", "Storie di Tutti i Giorni" and "Quando Nascero Di Nuovo" has long been recognized as masterpieces of the world stage.

Hurry to take advantage of the opportunity to hear these and other famous songs at the concert Riccardo Fogli!