Zhenya Lyubich. Presentation of the album "loud" in Saint-Petersburg 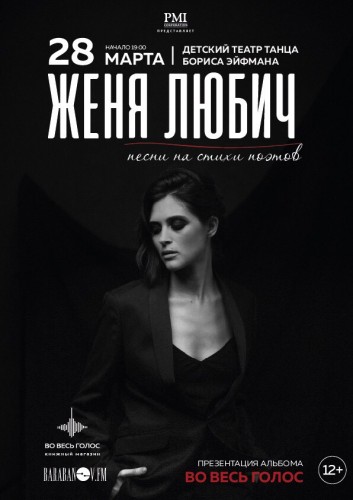 March 28 will be a concert presentation of the new album Zhenya Lubich in the Children's Theatre of Dance of Boris Eifman.

Zhenya Lubich will present their songs on verses of Russian, English and French poets of the 16th - 20th centuries.

For each poem, Eugene Lubich found his intonation, style and your sound. Mayakovsky sounds like Blues, Robert burns, ballad-y, and Lermontov as indie rock. Familiar to many poetic texts will appear in an unexpected musical key, they will open different meanings. The magic of this project and the effect of the cross cover: the authors of the poems are men, and the author of the music and the singer - front woman Zhenya Lyubich.

Program name coincides with the name of the album "loud" which will appear on digital platforms in the singer's birthday, March 20.

The concert will be held in the recently opened building of the Theatre of Dance of Boris Eifman. This charm, with perfect acoustics and is perfectly technically equipped space of the XXI century different appear and video installations, and the image of Zhenya Lubich, her voice and her music.