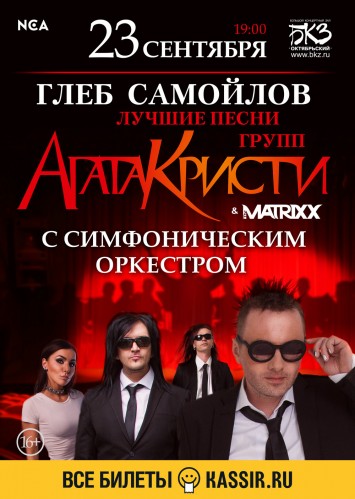 Best song "Agatha Christie" and The MATRIXX accompanied by a Symphony orchestra.

The legendary hero of Russian rock, Gleb Samoilov and his MATRIXX group The accompanied by a Symphony orchestra will perform April 2 at the concert hall "October"!
Charisma Gleb Samoilov and his signature drive, as well as the hits of the legendary "Agatha" in the orchestral arrangement with elements of theatrical action will create a mixture that will place and passion, and pain, and flight, and the anguish and the flashes of light, and Gothic darkness.
Group "Agatha Christie" could become not only the most popular musical group of the Millennium in Russia, but also managed to leave on time, not turned, like other groups of centenarians in the house of veterans of a name. In 2010 was born a new musical Union, more refined, ideologically aligned, honed musically, artistically sophisticated — "Самойлff Gleb & The MATRIXX". The musician is still on the horse and war, it comes to a new generation of admirers and fans. The composition of The MATRIXX is unique in that besides Gleb Samoilov of the band are musicians of the punk band "NAIVE": drummer Dmitry Snake Khakimov and guitarist Valery end it turned. In addition, in March 2016, the group was joined by ex-member 5diez — keyboardist and bass guitarist Stanislav Matveyev.
So, Gleb Samoilov was the author of most songs, "Agatha Christie", many of which became hits. However, the upcoming concert is not just a performance of songs of the legendary band is a reincarnation of music, reading it that way, as seen by the author, embodying his thoughts and aspirations in musical form.
The highlight of the concert will be the Symphony orchestra. Master of arrangements — the legendary Cyril Usman, famous for his work with groups "Aria" and "Kipelov". According to the Maestro, this work is not easy, because their songwriting Gleb Samoilov goes far beyond the traditional rock.