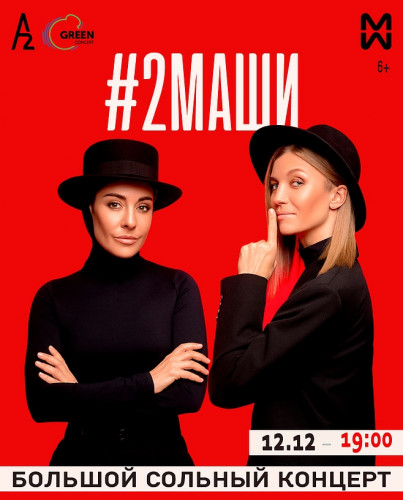 4 April A2 Green Concert duet #2Маши will present his big solo concert with great success was held in the month of November in Moscow in the concert hall Crocus city Hall.

Audiences can expect a two-hour musical treat that will give artist and great musicians. The concert will be held under the fiery rhythms of the dance hits such as "Bare", "Mom I'm dancing", "Frost", "Red White" etc. and soulful ballads "About us" "Now we're two", "Stars" and others.

In just a few years of existence #2Маши proved that the impossible is possible. Without record labels, producers, sponsors, financial capability, radio and TV rotation, they have achieved incredible success through his copyrighted songs and charisma. They began to share their creativity via social networks, where people's work word of mouth! More than 186 million views on the video "Bare", "Mom I'm dancing" - more than 116 million, a stable presence in the top charts, and, as a consequence, rotation on radio, where initially they categorically refused to take, citing the fact that their music is not the format. #2Маши is a story about the fact that if you strongly and passionately believe in their music, then anything is possible!

Don't miss your chance to get real musical buzz and energy charge April 4, in the A2 club Green Concert in Saint-Petersburg. After all concerts #2Маши is always explosive energy, great emotion, live sound and professional colorful musicians.