Kamasi Washington on June 30 in Saint-Petersburg 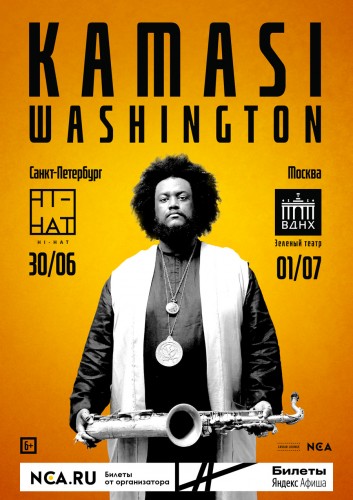 When in 2015 Kamasi Washington presented the album, The Epic, he instantly became a landmark in the world of jazz music, opening the door to a new world of improvisation. 172-minute musical Odyssey was filled with elements of hip-hop, classical music and R&B, and reflected all that had an influence on the saxophonist's Kamasi Washington. The young musician has surpassed all the existing ideas about what jazz music is.

The album, The Epic has won numerous awards, including American Music Prize and the Gilles Peterson Worldwide in the category "album of the year". In June 2018 Washington released the album Heaven and Earth. The album was voted "best" among Pitchfork, NPR, Variety, GQ, MOJO, Complex, and other reputable publications. Collaborating with leading Directors, created the film AS TOLD TO G/D THYSELF, inspired by this album. The premiere was held at Sundance film festival in January 2019.

The dream of Washington began at the age of 13 when he took up the saxophone his father and sang the song Wayne Shorter Sleeping Dancer Sleep On, although he did not know how to play it. Later Kamasi Washington was a tenor saxophonist at the Academy of Music and Performing Arts at Alexander Hamilton High School and graduate, created a group of Young Jazz Giants. Their first self-titled album became the basis for the spread of jazz across the country.

The popularity of Kamasi Washington is growing every day, attracting people of different nationalities and ages. He performs at the most renowned festivals in the world including Coachella, Glastonbury, Fuji Rock and Bonnaroo. One leading journalist wrote that, in the absence of new and exciting things in the jazz idiom, Washington made a musical breakthrough, based on respect and deep knowledge of the past and giving hope for the future.

The performance of Kumasi of Washington will be held June 30 at the Hi-Hat.