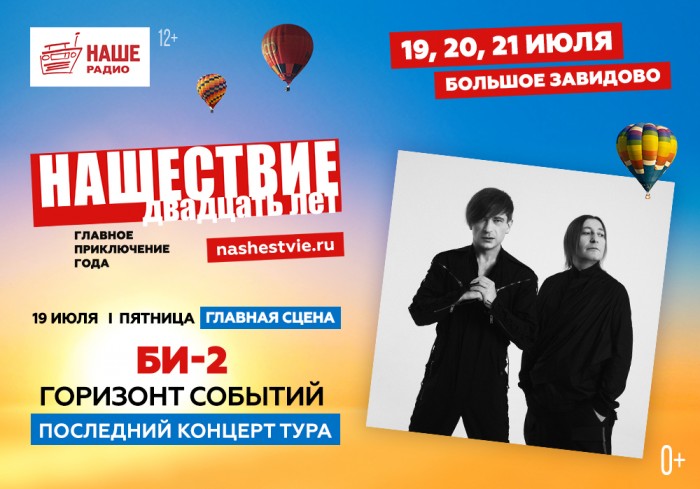 Group "BI-2" ends starting in the fall of 2017 big tour "event Horizon", during which the musicians performed in nearly 100 cities: the final concert will be held the largest in Russian music open-air "INVASION" July 19 at 21.00 and will be the main event of the Friday of the festival program.

In an interview with "Our Radio" Shura and Leva said that all guests of "the Main adventure of the year" will be able not only to see the last time this unique scenery, but to watch a documentary about its creation: "To "INVASION" the last time we will be showing this show. And on Friday night in the cinema tent "Lecture" you will be able to see the documentary film "event Horizon. Documentary" about how our team created this show, and how was the album recorded. We took a very active part in the editing, and filming, of course. I hope the public to "INVASION" it will be interesting to see it all".

As thinning of the band for this tour was original designed creative solutions: the new light show and an exclusive video series, which is broadcast on a unique swivel screen, designed and created specifically for the "event Horizon". On "the Main adventure of the year," the musicians will perform not only songs from the same album, but, of course, the main hits.

Group "BI-2" - the participants of the first "INVASION", which took place in 1999 in Moscow, DK "Gorbunova". One of the most interesting presentations was a joint Chicherina the song "My rock' n 'roll" in 2002 in Moscow. https://www.youtube.com/watch?v=_2ytfYkGcG0

All details about the festival "INVASION" 2019 - on the website nashestvie.ruin the air, "Nashe Radio" and social networks of the radio station.