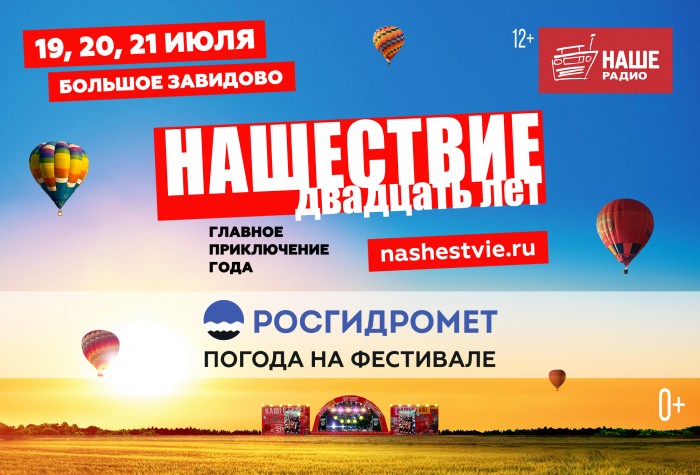 The main adventure of the year is just around the corner! Less than three weeks, thousands of Our going on the field in Big Zavidovo, to clearly and powerfully to celebrate the twentieth anniversary of the massive open-air country festival "INVASION" of 2019!

Like last summer, in 2019, the organizers of the most anticipated events of the season continue to take care of the comfort of the guests and inform about the required training. Most accurate weather forecast "INVASION" 2019 will represent the Federal service for Hydrometeorology and environmental monitoring ("Roshydromet").

Partners of the festival in the operational mode (every 3 hours!) will share the most accurate forecast based on data from the meteorological station in Konakovo the meteorological radar, located in Moscow. After the obtained object information is applied to the calculated mesoscale model, knowing everything about the terrain in the Big Zavidovo, the forecast will appear on the website of Roshydromet, on the official website and social networks of the festival. The most accurate data – daily, from July 17 to meteorf.ru!

All details about the festival "INVASION" 2019 - on the website nashestvie.ruin the air, "Nashe Radio" and social networks of the radio station.

"INVASION" – the largest Russian festival under the open sky, is the largest and most visited annual festival in Russia and CIS. Held since 1999. Founded by the radio station "NASHE Radio".

19, 20 and 21 July 2019 in the Big Zavidovo the Tver region "INVASION" will celebrate round date – 20 years. Over the long-run development of the festival audience were presented almost all the most significant Russian artists. "INVASION" is a multi – format music non-stop, is a place where legendary, and young performers.