LJ will be performing on EUROPA PLUS LIVE 2019 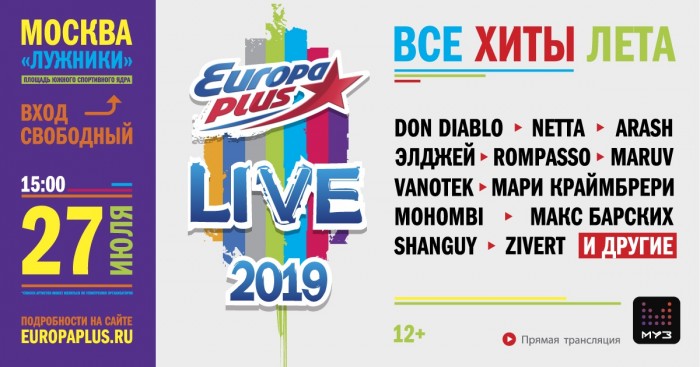 Lineup biggest open-air summer Europa Plus LIVE 2019 added another big name to 27 July on the stage of the "Luzhniki" will be released popular hip-hop artist LJ. The most controversial rapper of the Russian scene will perform their greatest hits and a new track "Sayonara Baby", recorded together with European pop-star Era of Istrefi.

"Sayonara Baby" is the second work from LJ this year. The release took place less than a month ago, but the song has already attracted attention and became a hit, which went in the hot playlist Europa Plus LIVE 2019.

During the 7-hour music marathon in front of hundreds of thousands of spectators are more than 20 of the headliners of Russian and foreign stage – the only modern artists whose tracks every day sound in the air "Europe Plus" and invariably lead the music charts. Among them: Don Diablo, Netta, Maruv, Shanguy, Mohombi, Arash,Vanotek, Arnon, Sonorous, Marie Krimpery, Tim3bomb, Tree, BURITO, Zivert, Artik&Asti, Nastya Curls, Ilkay Sencan, Elena Temnikova, Yulianna Karaulova, Rompasso, Max Barsky and many others.

Together with the artists to create a wonderful mood will be leading morning show "Brigada U" Jam, Ilya, and Wikis. The audience is waiting for unreal drive, meeting with the top stars, prize draws, fantastic surprises, and of course, more hits and more music!