20 STEPS IN HISTORY! In "the top crust" will feature musicians of the first "INVASION" 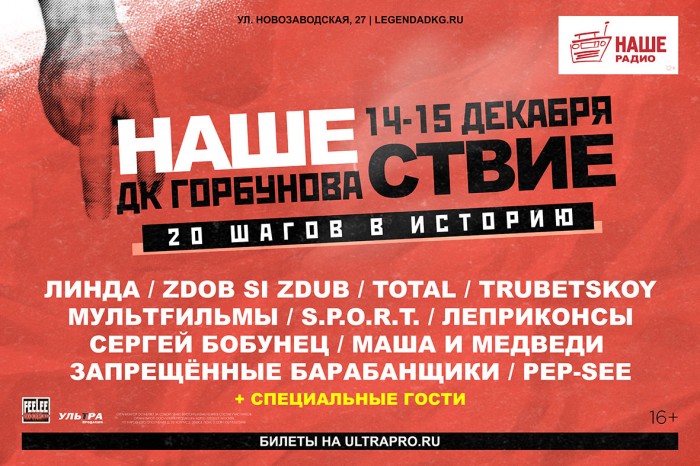 14-15 December in the walls of the legendary DK "Gorbunova" , musicians who 20 years ago went on stage the first festival "INVASION".

"NASHE Radio" began broadcasting in 1998-m to year. Through the crises, currency jumps and unstable situation in the country, this wave became louder and louder: it is music that penetrated the hearts of the people. For someone to OUR became the soundtrack of his youth, for someone- a breath of fresh air, hope that everything will change soon. First, were OUR artists and OUR songs, which had been collected by a team of passionate people, passionate love of rock-n-roll. A little later were OUR presenters, OUR programs, OUR hit parade. Yes, and Our listeners every day became more and more.

So there was OUR festival.

Home to the first "INVASION" was the legendary "Gorbushka". In the late ' 80s at the Palace of Culture named after Gorbunov was a "Moscow rock laboratory". In the early nineties for many musicians, the crust was "their" area.

December 1999. Your first birthday "NASHE Radio" has decided to celebrate the two-day music marathon in DC Gorbunov. These walls remember Svyatoslav Vakarchuk, get out of the fridge right on the stage, Micah, who is no longer with us; Linda, who drove the audience crazy with his outrageous appearance; unique Duo Zdob Si Zdub and Ivan Kupala. Dolphin, PEP-SEE, b-2... And an impressive output of Zemfira in the final. It was the first time sounded the branded space of the festival, that is with us still.

For two decades the festival has done a really impressive way: from small events radio station turned into a huge multi-day multi-format holiday for which people cross continents and countries, and which are waiting for the whole year.

The festival is a pioneer, the biggest music open-air festival with a story about "INVASION". In the year of the 20th anniversary we want to look back and remember what was the first "INVASION" in the walls of the legendary "Gorbushka". We congratulate "OUR Radio" happy birthday and join us in this exciting journey called "the INVASION. 20 STEPS IN HISTORY" together with the artists, which became the first step in the history of the festival: