In Variety Theatre. Raikin started the second season of the project #of TETRASPANIN 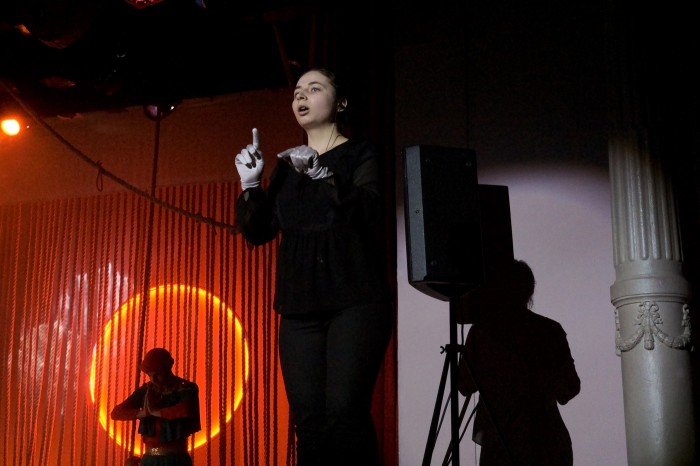 The project "Theatre without borders", coined by Variety Theatre. Raikin for the first time in Russia and launched last year is the regular performances for hearing-impaired children with the participation of highly professional sign language interpreter Oksana Butsyk. Through this initiative, almost 250 deaf and hard of hearing children looked children's theater performances with adobereader. Its a special and important achievement of the Theater Stage considers the development of the principle of an accessible environment in the field of culture and creating in the audience a special atmosphere of humanity and equality.

Twice a month on the stage are not only actors, but also the interpreter. Special viewers are allocated special seats in the front rows, where it is well visible not only for theatrical effect, but Oksana Butsyk that uuzhe performed the sign language for the greater part of children's repertoire Theater Stage – musical fairy tales "Cinderella" and "Rikki-Tiki-Tavi", musicals, "Mama-cat" and "Barmaley". And, just imagine, she was able to do sign language even to the music, which is the theatre occupies a dominant position.
This year the Theatre has decided to go even further, and plans to sign language children's tours of the theatre backstage. The first performance of the project #of TETRASPANIN family musical "Mama-cat", held on 27 October, was successfully launched this amazing and extremely important undertaking.

Attention!
About the dates and times of tours to be announced. The next step of the project will be organization for children with disabilities tours of the theatre and regular performances those who use a wheelchair. Follow the information on the website of the theatre estrada.spb.ru and in social networks.
The special project page - http://estrada.spb.ru/spektakli-s-surdoperevodom/
In order to purchase preferential tickets for seats for people with disabilities, you must contact the theatre box office and present a certificate of illness.
Phone 314-66-61 (ticket office) to book tickets for individual visits of parents with children. Box office opening hours: from 12-00 to 21-00. Break: from 15-00 to 16-00)
Group applications for events in the framework of the project #of TETRASPANIN (performances with sign language translation, discover) are accepted theatrical cashiers or administrators of the theatre (tel 314-70-61). Tickets must be purchased two days before the tour or performance.