ENTER SHIKARI. A documentary about the Russian tour 2019 ‘Further East’ 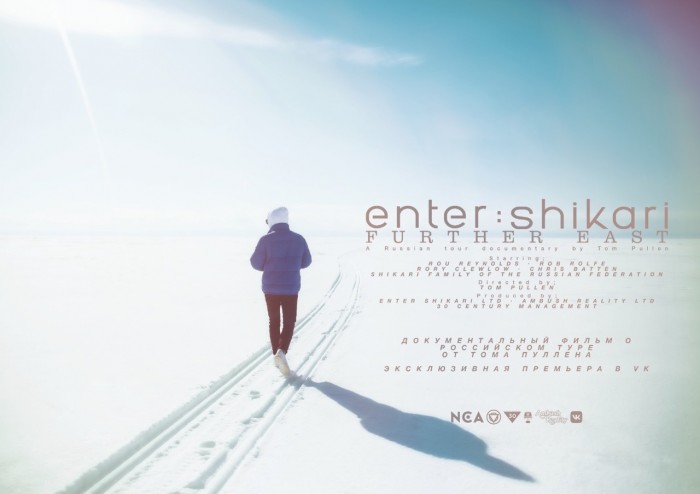 In March this year, British hardcore Enter Shikari successfully toured the country with the largest and the longest in the history of the group of Russian tour Stop The Clocks: 8 cities in 2 weeks. Moscow, St. Petersburg, Yekaterinburg, Nizhny Novgorod, Krasnodar, Rostov-on-don, Krasnoyarsk and Irkutsk – tens of thousands of fans lit together with the musicians!

The Russian tour group was captured in the time the documentary Further East, filmed by photographer/videographer group Tom Pullano. The film collected the most significant moments, starting with performances at the prestigious show "Evening Urgant", the broadcasts on the largest radio stations and large-scale concerts in Moscow, St.-Petersburg, Ekaterinburg and ending with the club show and walks on the frozen lake Baikal. Documentary film Pullen to provide the most candid information not only about the "traveling circus Shikari", but about a country that is rarely represented in "traditional" rock-n-roll stories. All seasoned with a wonderful sense of humor and true British charm. The film was exclusively presented in VK. The full version you will find the link: vk.com/entershikari

"We are always happy to perform in Russia, as our fans here are just fantastic. We had a fabulous time on this tour. It was great to see old friends and make new ones in such cities as Moscow, St. Petersburg and Yekaterinburg. It was also wonderful to visit new cities where we previously were.”

“It was fantastic to visit new places and get the same warm reception. The show was great, but visits to such places as lake Baikal was very inspiring to us. I hope our love for the country and its people was reflected in the movie Tom, and, of course, that you will enjoy.”

Happy viewing and see you at the upcoming shows Enter Shikari!