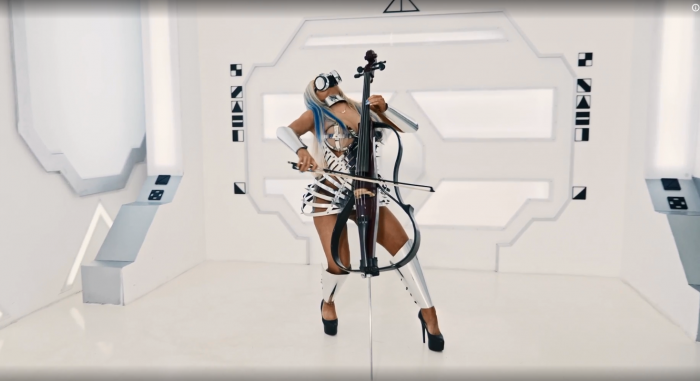 Those who are familiar with the work of contemporary women elektromekaniske SOFI from Russia, has long known that she does nothing without intuitive meaning of implication. Actively interested in current social issues in Russia and the world ,doing charity work , AVON has released a new video and it appeals to people with a message .

The upcoming release of the game "Cyberpunk 2077" looking forward to millions of gamers around the world. Anticipating this event , not just SOFI performs one of the musical themes of this game , but also holds interesting Parallels:

-a post-apocalyptic world of the game ,

problems in the global environment , -awareness of people .

In the world of "Cyberpunk 2077" people don't just transplanting in body implants for the sake of survival, but even Express themselves through the cybernetic body modifications. People do yourself a chrome body, not for practical reasons, but primarily because it is fashionable.

"Very soon it may become a reality. People ,if they don't obey now, will have to implant itself , for example ,a chrome mask , because landfills will permanently poison the environment. But people will be convinced that the mask is just a fad!" (SOFI)

Not done in the video and no hype. Pretty straightforward costume is an intriguing question : was the heroine a victim of a post-apocalyptic future upgrade implants not only in chrome,but in silicone ??

A metaphor for how awareness of the person is thrown as waste and unwanted junk , and as a result , it turns into slavery for the human personality. Here is the environment of the individual post-apocalyptic future according to SOFI.

"Cyberpunk 2077" - multiplatform computer game in the genre of Action/RPG , developed by Polish Studio CD PROJEKT RED. The game is a sequel to the Board game "Cyberpunk 2020"

actions will take place after 57 years in the big city knight city located in the state of California. The announcement of the "Cyberpunk 2077" was held on 30 may 2012. At E3 2019 was presented the cinematic trailer for the game a year later at E3 2019 was shown another trailer and was named release date — 16 April 2020.

-Video can be viewed on the official YouTube Channel of SOFI : https://youtu.be/c_FyQw0yYyo

Music for her debut album, Regeneration(2016) opened the stadium "Sankt-the Petersburg arena", the fan zone of the FIFA World Cup 2018 , World Championship hockey 2016 and the FIFA Confederations Cup 2017,music SOFI listened to the thousands of people on the festival of light at St. Isaac's and Palace squares, SOFI has gathered thousands of fans on Ostrovsky square and created a motivational show "МАGNIТ", which premiered December 15, 2017 at the stadium, the Ice Palace of St. Petersburg.