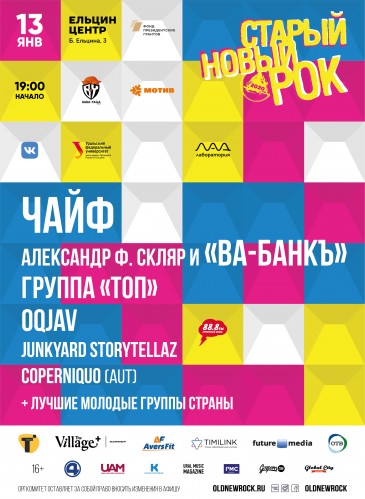 "Old New Rock 2020", a music festival with more than 20-year history opens its doors for the last time. Until 1 December, musicians can apply for participation in the festival. The Advisory Council will occlusal all musical groups, and will select those who will go down in history and will perform at the latest festival Old New Rock.

Old New Rock offers a rare opportunity to perform on the same stage with Alexander F. Sklyar and the group "VA-Bank" (Moscow), a group of "TOP" (Ekaterinburg), JunkyardStorytellaz (Saint Petersburg), OQJAV (Moscow), Coperniquo (Salzburg, Austria) and, of course, the legendary group "CHAJF", which will close the festival with their performance.

For many, January 13, is, first and foremost, the largest winter festival Russia's Old New Rock, and only then the old new year. For many years the festival has gathered the stage, the legendary rockers and young musicians. Has become a platform for establishment and development of the many talented musicians have opened them to a wider audience. On the stage of the rose festival Nautilus Pompilius and Splin, Smyslovye gallyutsinatsii and 10 CC, Agatha Christie and UriahHeep, Dolphin and Nogu Svelo, Forbidden Drummers and Bravo!, Aria and Lumen, Siskin and Tequilajazz, the group "Nastya" and FoolsGarden, Vopl Deplasa and 5'Nizza, Brainstorm and many other musicians of Russia, USA, Germany, Denmark, Spain and Holland.

Have time to purchase tickets for "Old New Rock" at the price of 1200 rubles to the first of December https://pclad.timepad.ru/event/1093357/

Tickets in all cash desks of the city

The project is being implemented through a grant of the President of the Russian Federation on development of civil society provided by the presidential grants.