In 2020, DDT will collect stadiums 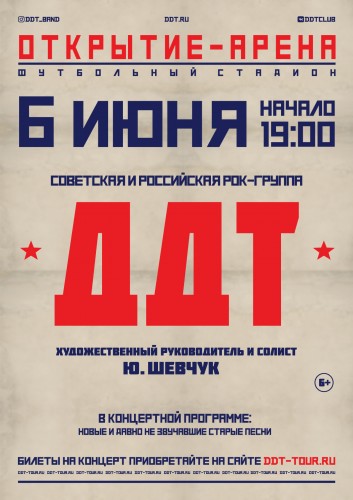 Legends of Russian rock band "DDT" - in March 2020, will begin jubilee tour in Russia with an entirely new program. And the musicians in the tour plan 3 stadium concert in Moscow, St. Petersburg and Ufa, where 40 years ago and became a legendary team.

Details of the program are not revealed yet, but the tracklist will include all the favourite and familiar, and brand new songs.

Recall that the group "DDT" just today finished his big tour with the program "History of sound" that began with the concerts in "Olympic" and the CCM and expressed not only in our country but also in other continents.

From January 22, the allowed number of viewers in Moscow has been increased
More people can go to theaters, cinemas, concert halls
Temiko 9 hours ago

Olya Ch. Has released a new maxi-single: “This is a special work. This is how time sounds "
Mini-record "Hi, Dad!" completely created live
Temiko 2 days ago