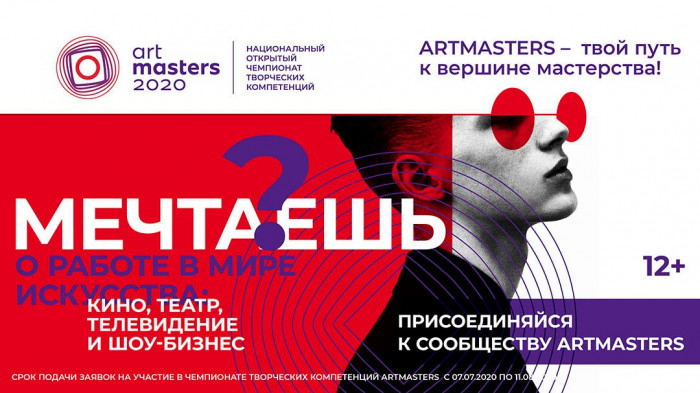 Photo source:
the press service of the event

ArtMasters championship has announced the full composition of the Supervisory Board of the organizing Committee and the ambassadors of the competition, which included the masters of Russian culture, show business and media. Among them — Konstantin Ernst, CEO of channel one, Karen Shakhnazarov, General Director of film concern "Mosfilm", the composer and producer Igor Krutoy, actor and artistic Director of the Moscow theatre of Oleg Tabakov, Vladimir Mashkov and etc. They joined the event to provide participants all the conditions for creative self-expression, to act as their mentors and provide a real opportunity for career growth and realization of their own projects.

"ArtMasters is not just a competition for competing artists, musicians, designers and music video. Choose the best and to present the prizes — this is not enough. It is important for us to start working social Elevator for talented professionals. The experts will be able to see the contestants and to those who are worthy to continue in the chosen direction. Our goal is after the completion of the championship immediately to integrate the participants in the professional environment, provide an opportunity to learn and improve their skills in creative Universities and internships in media companies and cultural institutions", — said Igor Matvienko, member of the Supervisory Council and the Ambassador of the championship ArtMasters, composer and producer, head of "Producer center of Igor Matvienko".

ArtMasters championship was the first creative competition in Russia, bringing together those who today defines the landscape of the creative industry. For them, the championship is an opportunity to attract young and talented professionals early in their career, and for participants — future internships and employment with major companies and various institutions the opportunity to meet like-minded people and join with them in a team for implementing creative projects. In the first year the championship will be held on the 16 competencies, including lighting designer, operator, mechanics of scenes, costume designer, sound designer, graphic designer, set designer etc.

In addition to the professions related to theatre, media and film, the list of competences of the championship ArtMasters is, those needed by the IT industry and video game — game designer, web designer, graphic designer, mixed reality. For them, the competition also will provide opportunities to demonstrate professional skills and further career development.

"These Championships give the participants an opportunity to quickly Express yourself and get into the industry, and companies to learn about new young professionals. We Mail.ru Group for 9 years competitions of all types, including Championships. We have gained experience and they gladly share that we will be experts and will provide a platform for the finals of the games. The best participants we can offer training. This is a great chance to start a great career: more than 80% of our interns go on to work in Mail.ru Group", — said Boris Dobrodeyev, member of the Supervisory Board of the Championship ArtMasters, CEO Mail.ru Group.

In addition, the championship was joined by the ambassadors whose mission is to support participants and to create conditions for fair and open competition. This year's ambassadors of the contest will be Dmitry Bertman, Director General – artistic Director of "Helikon-Opera" Alexey Golubev, Director and founder of international film production companies "MAG Film Moscow", Svetlana Zhurova, Olympic Champion, multiple world Champion in speed skating, Deputy of the State Duma, Diana Gurtskaya, Russian singer and public figure, Ilya Popov, the Creator of the brand "Smeshariki", General producer of the group of companies "Riki" etc.

"Sure, ArtMasters is a project that will be a bright and successful start to hundreds of bright young people. Thanks to him, a talent gets the opportunity to implement. And it's very cool!" — Mrs. Diana Gurtskaya, the Ambassador of the Championship ArtMasters, Russian singer and public figure.

With a full cast of members of the Supervisory Board of the organizing Committee and the ambassadors can be found on the official website of the championship artmasters.ru.